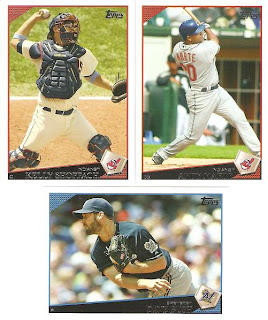 I posted Shoppach and Marte because they were the answers to the bonus questions for this weeks Spot the Sig! Dave Bush is a local product who hung out with the Len Dykstra family as a kid and it is also a pretty sharp looking card. It is an oddity that the bonus cards were both Inidians. The top insert for the pack is the redemption, which you can see elsewhere so I didn't bother posting one here. 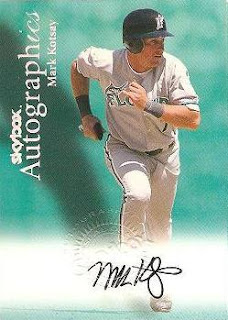 I have liked the few Skybox Autographics cards that I have seen. They have a nice look with an on card signature. I think I picked this card up as part of a 5 junk-autos for $20 lot which is right about where I would put a Mark Kotsay auto.
I had this card as a triple, simply because it isn't the cleanest auto in the world, and it isn't like Mark Kotsay is a household name. Of course when you spend the bulk of your carreer in Oakland, I think it is easy to get missed. I really thought coming out of college Kotsay would become a big star. Unfortunately it hasn't quite worked out that way. He has been a career .280 hitter without enough pop to be a offensive force in the outfield. I still think he is a good player and it will be interesting to see how the 2nd act of his career works out.
PTBNL got this Auto for a Triple and plated two runners. That gives PTBNL 8 runs going into the final three innings of the STS competition.

As far as the bonuses, Marte was the low card, which Nachos Grande nailed picking card number 3 - stealing home and getting his first Run! PTBNL picked card 315 only 4 off of Shoppach's 311 to get the other bonus.

Here are the Spot The Sig! standings after six innings:

PTBNL - repsresentin those Fightin Phillies - 9 Runs - bases empty
Night Owl - Dodgers - 3 Runs in man on 1st
Cardboard Junkie - Braves - 3 Runs in - bases empty
Stats on the Back - Mets - 1 Run in - Man on 3rd
Nachos Grande - Reds - 1 Run in. bases empty.
Card Buzz - Angels - Man on Second.
Cardboard Addiction - Bosox - Man on First
A Cardboard Problem - Yankees - man on first.
Covered in Wrappers - Cardinals - On Deck
For further information regarding the Phungo Spot the Sig! contest click here and join the party - you just may find yourself with a stack of cards come spring training!
Posted by deal at 9:03 PM

I actually had Kotsay as a possible answer, but my search of his autographs didn't seem to match the one you displayed.

Of course, I was doing this in a hurried fashion while at work, so I probably fouled it up.

you need to get your priorities in order.

Related to nothing, that is a cool Dave Bush card. But he once had that great mustache, which seems to have been replaced by a plain vanilla beard.

What happened to Cole Hamels on third? Shouldn't he have stolen home with his blazing speed?

PTBNL you are correct. You have 9 runs and bases empty. Cole Hamels Steals Home as he lulls the opposing pitcher to sleep.

you may be tough to catch.

Aand Dinged Corners, maybe Bush is following in the mode of Jason Giambi and now going without the -stache.