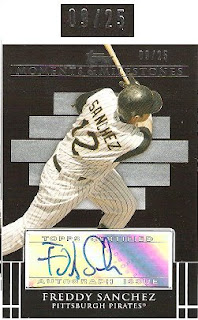 2008 Moments & Milestones Black Auto MA-FS Freddy Sanchez (09/25)
Freddy Sanchez won a batting title in 2006 batting an impressive .344 for the Pittsburgh Pirates. He has also won Major League Baseball Tony Conigliaro Award for overcoming adversity that same year. Sanchez was born with deformities in each of his feet (one clubbed, one severely pigeon towed) and it was once believed that he would never gain the ability to walk.

I tend to believe that Sanchez's 06 campaign is a career year, that I doubt he will duplicate. Regardless, one has to admire a person who has overcome such physical challenges and excel at a competitive sports highest level.

I am also glad to see the Pirates have locked up Sanchez for a few years. The Pirates are a team with a great baseball history and their fans deserve a better product then their management has put together for the last dozen plus years.

This auto is pack pulled form the only pack of Topps Moments and Milestones that I have ever purchased. I picked the pack up at a card shop on a whim while picking up some supplies. I am pretty sure this shop doesn't do any pack searching as I have had extraordinary luck with hits at this particular store.

Congrats to Stats on the Back, who persevered and found this auto. The Double will give his team another run and put him right in the middle of the mix for the runner up spot in this seasons Spot the Sig competition.

This ain't a pretty auto but you can make out the F and S pretty easily, and there were a bunch of Sanchez autos out across the Topps line in the last couple of years - that is why I went with double on this one rather than Triple.

The Bonus goes to Nachos Grande who was 3 off of the serial number of 9. It is hard to make out on the scan but it really is a 9. This bonus was for those collectors astute enough to figure out that this is a Milestone card and those have a fairly low serial number range. This particular card was a "Black" Auto only produced to a number of 25.
Here are the standings with one inning remaining.
PTBNL - repsresentin those Fightin Phillies - 9 Runs - bases empty
Night Owl - Dodgers - 3 Runs in man on 2nd
Cardboard Junkie - Braves - 3 Runs in - bases empty
Card Buzz - Angels - 2 runs in on Vlad Guerrero Home Run! Bases empty.
Stats on the Back - Mets - 2 Run in - Man on 2nd
Nachos Grande - Reds - 1 Run in. Men on 2nd.
Cardboard Addiction - Bosox - Man on First
A Cardboard Problem - Yankees - man on first.
Covered in Wrappers - Cardinals - On Deck

For further information regarding the Phungo Spot the Sig! contest click here and join the party.
Posted by deal at 6:49 PM