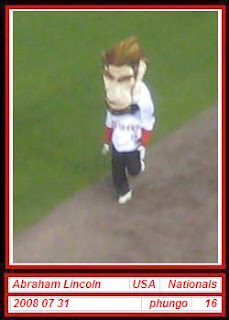 Today is the 200th anniversary of Abraham Lincoln's Birth. I don't think anybody will argue that he is worthy of a Phungo Hall of Fame Thursday entry.

As I have mentioned previously Phungo Cards stole some ideas from Allen & Ginter and included some non-baseball figures, places, and items. This Phungo card is of the Abraham Lincoln mascot who works the stands at Washington Nationals games. Similar to Milwaukee where they have a sausage race, the Nats have a presidents race. The four presidents are Washington, Jefferson, Lincoln and Teddy Roosevelt. If you ever go to a game and watch the race, don't bet on Roosevelt - trust me. The photo is from the race on July 31, 2008, which was won by Lincoln. In fact Honest Abe won a lot of races in 08.

The Abraham Lincoln Phungo card is number 16 as because he was the 16th president. I listed USA in the position area and Nationals as the team.
Posted by deal at 4:35 PM