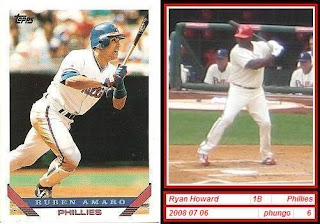 This week GM Ruben Amaro Jr and the Phillies signed First Baseman Ryan Howard to a 3 year 54 million dollar deal. I am not sure that this is significantly less then Howard would have gotten via arbitration, but I am glad that the Howard and the Phillies won't have to go through the arbitration process until Howard's free agent year.

The Ryan Howard Phungo card was taken during a very long emotional rain delayed loss to the Mets on July 6th. I actually left this game early in a pouring rain, which I rarely do. I chose Howard's number 6 as the card number. In the dugout you can see the Phillies were wearing their Patriotic caps for the Fourth of July weekend.
Posted by deal at 8:36 PM