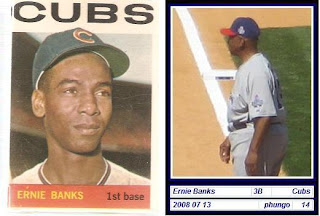 The Topps card I received in a trade with Adam from Thoughts and Sox. I sent over a couple of vintage Red Sox and a pile of more recent Bosox and he sent back bunch of Phillies and the 1964 Banks card above.

The Phungo card has a picture taken during the 2008 All-Star Futures game. Banks was named an honorary captain. I erroneously put down his position has 3B, for some reason I thought I heard that he was inducted into the HOF as a Third Basemen. According to the Hall of Fame Website he was inducted as a shortstop. Banks did play about half of his career at first base. Banks' Phungo card number is 14 which is the number he wore during his playing career, and was also the first number ever retired by the Cubs.

One interesting fact I found out while researching this post is that on May 8th 1973, Cubs manager Whitey Lockman was ejected from a game versus the Padres. Banks was a coach for the Cubs at the time and took over the helm for the team. The Cubs went on to win the game in 12 innings 3-2. This game preceded Frank Robinson's first management stint by nearly two years, meaning that Banks was the first black manager in Major League Baseball.

Banks has established the charity Live Above and Beyond Foundation as an organization to fight discrimination among various age groups. Proceeds from the charity wine Ernie Banks 512 Chardonnay benefit the foundation.

Links
Phungo HoF Index - Ernie Banks
*Note - This column was written before I started sourcing posts, I am guessing most of the statistical information from Baseball-ref and other info from the always reliable wikipedia
Posted by deal at 8:23 PM

Thanks for the link. I'm glad you liked the card(s). Look for a post on my haul from you in the near future.

Yeah I want to get links up on the sidebar of my trading partners too, but haven't gotten around to it. I also meant to post more of your cards - but didn't get them scanned before sorting them into my phillies cards.