One more football post and then back to good old Baseball. 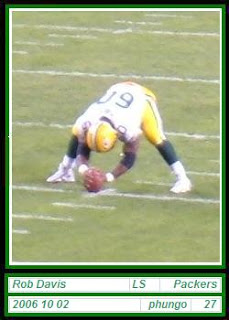 As far as the card, I took the photo prior to a Monday game versus the Eagles. The Eagles ended up winning the game by a 31-9 after a pretty tight first half. I listed Davis' position as 'LS' for long snapper. The card number of 27 has no significance, and I am pretty sure this is the only football card in the 2009 Phungo Set. I also believe there has never been a card published my one of the major card companies of Davis, other than possibly local team sets.
Posted by deal at 5:12 PM