Congrats to Laurens of Card Buzz who knocked out the first Homer of the Spot the Sig! season for identifying Gorman Thomas as this weeks Autograph - more on Gorman below. 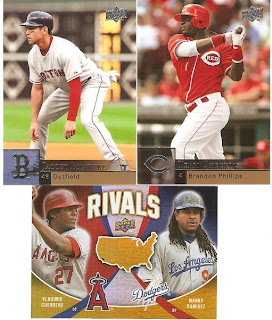 For the Bonus the first pack of 2008 UD Series One yielded the following:

I found the Rivals card amusing. Yes, the Dodgers and Angels may be considered rivals, but I am not sure that Manny Ramirez has ever faced the Angels while wearing a Dodgers uni. Probably should have saved this for Sloppy Topps - er I mean Upper Dreck. 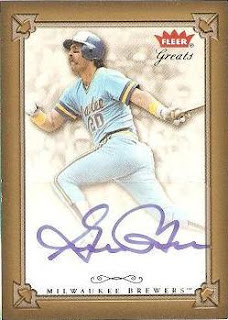 Gorman Thomas was the first draft pick by the Seattle Pilots in 1969, The Pilots would move to Milwaukee where Thomas became a fan favorite and a heck of a power threat. Of course his power numbers were not without problems. Stormin' Gorman struck out at a prolific rate. Even in a career year like 1979 when he hit 45 homers and 123 RBI he struck out 175 times and batted only .244. It is no surprise to a Phillies fan that the active player that (according to Baseball-Reference) Thomas compares most closely to is Pat Burrell. As a kid I always thought of him as the American Leagues Dave Kingman. I remember reading on the back of a baseball card one year that his BA was .198 for the season and thinking how can this guy stay in the league.
The Home Runs were not the only reason Thomas was popular in Milwaukee. In a town famous for manufacturing fine adult beverages, he was known as an avid partier who would join a tailgate after (and before) games. I couldn't find any mention on the Brewer's website but apparently Gorman Thomas is the namesake for Gorman's Grill at Miller Park and can sometimes be spotted there for Home Games.
I gave this Auto a Home Run - Gorman Thomas is not an active player, not a hall of famer, and while he did lead the league in Homers a couple of times, I am sure not many people think of him outside of Milwaukee. The signature isn't awful sloppy, but certainly not easy to make out. The card is from the rather nice looking 2004 Fleer Greats of the Games Series which features autos of many great players from the past. The autos are on stickers but they are clear which helps to give the appearance of on card autos. In the scan, I left in a part of the border as a hint to the set this card came from. I am curious if this is how Card Buzz IDd the sig or if he recognized the auto.
Here are the STS! standings after 7 innings.


For further information regarding the Phungo Spot the Sig! contest click here and join the party - you just may find yourself with a stack of cards come spring training!