The Phungo readers have spoken.

with 11 votes out of 18 Jim Rice did not get the required 75% of the vote to get into the Phungo Hall of Fame. 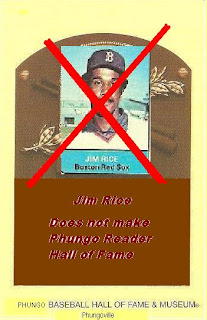 I was a little disappointed as I thought I made some compelling arguments for Rice's candidacy. The only comment on the post was for Rice. But even if I counted my vote five times and gave Night Owl's comment a weight of five votes that would have given Rice only 19 Yea's to 7 Nay's still short of the requisite 75%.

11/18 votes(61%) is enough to keep Rice on the Phungo Ballot and perhaps we will bring him back next year for another vote.

This was an interesting exercise and I would like to bring up another borderline HOF candidate up, Tommy John.

Tommy John, unlike Rice was rejected by the BBWAA on his final ballot. John posted 288 career wins, 294 if you count the post season. He was the part of three World Series teams, and played for three different teams in the playoffs (Dodgers, Yankees, and Angels).

And of course, Tommy John is the first player to successfully recover from the surgery, that bears his name, to pitch again - and pitch very effectively. Check out the list of names under that surgery link - pretty impressive.

To your right you will see a new Hall of Fame Poll on Tommy John - Team Phungo is interested in your opinion.
Posted by deal at 12:33 PM