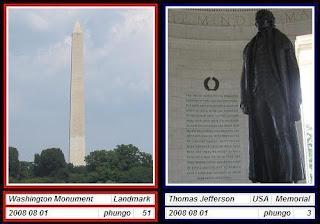 For Presidents day I present two cards from the Phungo set. Both are from a vacation we took to Washington DC this past summer. The first is of the Washington Monument the second is of the Jefferson Memorial. The photo of the Washington Monument was taken from the outside the Jefferson Memorial. This is a great vantage point for this shot, there is a lake that separates the two locations and affords one a clear view of the monument.
The Jefferson card is number 3 to represent him as the third president. The Jefferson Memorial has a statue of Jefferson at the center with an entryway on each of four sides. Between each of these sides is a wall containing a quote or essay excerpt from Jefferson. This card is to small to read the inscription:

I am not an advocate for frequent changes in laws and constitutions. But laws and institutions must go hand in hand with the progress of the human mind. As that becomes more developed, more enlightened, as new discoveries are made, new truths discovered and manners and opinions change, with the change of circumstances, institutions must advance also to keep pace with the times. We might as well require a man to wear still the coat which fitted him when a boy as civilized society to remain ever under the regimen of their barbarous ancestors.
#1 was taken for Richie Ashburn, the Washington Monument got booted to #51. For the Jefferson card as with the Lincoln Card from last week, I have listed USA where the player position is typically listed for the baseball player cards.

Hottest Fans of the NL East?

More Hardball wants to know who has the hottest fans in baseball. We'll be running a set of posts over the following weeks featuring images of each teams' hotties, with a voting poll to crown a champion. We've crowned champs of the AL East (BoSox), Central (ChiSox), West (Angels), and AL Wild Card (A's) already, and we're now moving on to the National League...NL East. Sticking true to Major League Baseball's roots, there will be an eight team playoff system where the winners of each division square off with the addition of a wild card team to determine who wins the pennant and represents each league in the World Series of Hotness.