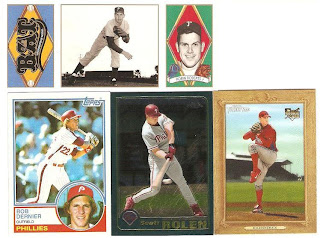 Indians Baseball Cards. And then some... found himself with a few extra cards and I believe under threat of eviction was good enough to offer them up to other collectors.

Being the good person that I am and understanding Dave's plight I offered to provide a home for the extra cards and when I say extra cards....I mean extra cards!!! Dave sent out two 300 count boxes of cards. I will be sorting them out for days.

Above are some of the Highlights. In 1993 UD produced an All-Time Heroes set that homages the Hassan T-202 cards from 1912. The cards are a nice idea and very sharp looking.

1983 is a set that I am pretty light on, and may be the last year that I collected cards before returning to the hobby. Bob Dernier was one of my favorite players in the mid-80s and this is a great addition to the collection.

I will always have mixed emotions about Scott Rolen. He always played hard and put up good numbers, but boy could he be a Diva sometimes.

A lot of the cards Dave sent over were from the late 80s and early 90s, but there were a handful of cool newer cards like this Turkey Red Kyle Kendrick.
Posted by deal at 6:28 PM