I sort of thought the Gil Meche would be a tougher auto, since it was of a lesser known player who toils in a small market and the card is from the somewhat obscure Team Best series. 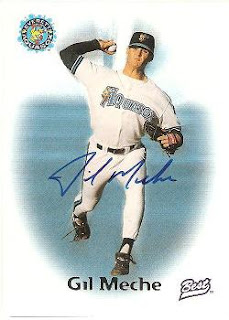 However this was no trouble at all for Nachos Grande who nailed a Brandon Phillips Triple.

Gil Meche is somewhat unknown around the league, but if your team has faced him, they may have had a tough time. While not outstanding he has been pretty steady the last couple years.

This is one of the Team Best Autos that are usually pretty cheap. I think I shelled out 4 bucks for this one in a 5 autos for $20 binge at a local card shop. Currently there are only two completed listings on Ebay for Meche autos both went for $3.99.

As far as the array of bonus questions....
I ended up watching the bulk of the SuperBowl, which I really had little interest in, apart from knowing a bunch of Steelers fans. The game was entertaining and had a very strong finish. It was good to see the Cardinals show up and play competitively enough that if a few things had gone their way they could have won.

I thought the Springsteen set was a bit upside down. I think I would have started with Glory Days and ended with Born to Run, but I won't argue with the Boss.

Night Owl got the Springsteen Bonus for picking 2 of the 4 songs.
The current STS! standings after five innings:
I will need an abacus to figure this all out. I believe I have it, if you think I messed up let me know in the comments.

For further information regarding the Phungo Spot the Sig! contest click here and join the party - you just may find yourself with a stack of cards come spring training!
Posted by deal at 9:21 PM

Hey, I finally got one right!

And you got it quick! There are a couple of toughies in the final few weeks so I think it is still a wide open race.