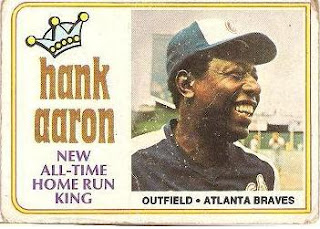 Today is Hammerin Hank's 75th birthday. I am not sure but I think 75 is the Diamond Anniversary, which is appropriate, because it is upon the Baseball Diamond where Hank Aaron made his name.

Hank Aaron: 755 Career Homers, 2297 RBI ,1477 XBH all still tops among Right Handed batters. He also scored 2174 Runs (4th overall, 2nd RH). Aaron played in 24 All-Star games during a 23 year career, try and top that! For a couple of years in the late 50s and early 60s they played two all-star games, which made this All-Star feat possible.

Aaron was also a member of the 1957 World Champion Milwaukee Braves who bested the Yankees in seven games. He homered 3 times in that series, but the big star was Lew Burdette who won three World Series games - including shutouts in games 5 and 7.

This is kind of cool - archive.org has audio of three different Home Run calls for Hank Aarons 715th Home Run.

and I will leave you with this tidbit from baseball-reference:

I was always annoyed that Aaron didn't get a card like everyone else did in that set.