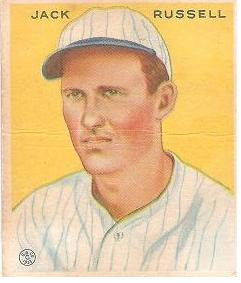 Today the Phillies played their first spring training game. They lost to the Pirates in Bradenton. On Thursday the Phils will host the Toronto Blue Jays at their relatively new home "Bright House Field".

Until 2003 the Philadlephia Phillies (as well as the FSL Clearwater Phils) played their home games at Jack Russell Memorial Stadium. Jack Russell was a major league ballplayer who settled in Clearwater, got involved in local politics and was an instrumental figure in raising funds to build the stadium.
During his 15 year career Russell pitched for six different teams, participated in two World Series (33 Senators, 38 Cubs), and earned a spot on the second ever All-Star Team in 1934. He never played for the Phillies but his name is definitely familiar to Phillies Fans.

I always wondered who Jack Russell was. I didn't think that he would be a ballplayer, though.