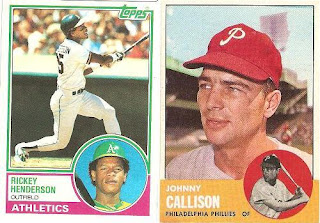 No, I am not drawing a comparison between recent Hall of Fame inductee Rickey Henderson and Johnny Callison. There is little linking Henderson and Callison other than in the years that each of these cards were produced both players were 24 years old.

I really wanted to take this opportunity to present an 83 Topps card paired with a 1963 card. As you can tell the cards are definitely siblings. With the Round mini-photo at the bottom right side of the card and player team and postion on the bottom left. It is a good design - I prefer the framing on the small photo in the 1983 design. The 1963 mini photo sort of ends abrubtly - sort of has a clip art feel to it. Regardless it is a worthy older brother of the 1983 topps.

Henderson is an easy choice this week. Yes I am sort of mailing this one in. I don't know if I need to run much of a profile on Henderson, there are plenty of other sources for that this week. I will note that I was a Lou Brock fan when I was a kid so I didn't much care for Henderson showboating when he broke Brock's stolen base record. Other than that it doesn't bother me if Henderson or anybody ever gets in with 100% of the HOF vote. It is something for everyone to talk about, and makes for interesting arguments. My opinion comes down to if Babe Ruth wasn't unanimous, it certainly should not bother anybody else to not be unanimous.

Some pieces of personal trivia from the Phungo annals and Baseball-Reference. I can now add Henderson to the list of Hall of Famers that I have seen play. And he is one of only two Hall of Fame players I have seen play in a World Series game (Paul Molitor). Henderson stole 1406 bases, I was present for stolen base number 1336. I don't really remember that game other than thinking at the time, the guy is still a threat to get on base and steal bases even if he can't hit the Mendoza line. He was also a bit of a liability in left field by then. Had no arm left by that point in his career as I remember.
Posted by deal at 7:13 PM

I can only remember two players from the first baseball game I attended, when I was about 8. Willie Mays and Johnny Callison.

Those certainly are good ones to remember. I remember 3 Don Sutton, Steve Carlton and Davey Lopes. of course through the magic of Baseball Reference, I found all the players from that game - Phils won not a bad first game!