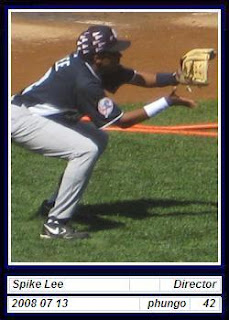 For today's Phungo Card I am giving a nod to Allen & Ginter and have gone outside of the realm of baseball.

Today's subject is Spike Lee. Lee has made a couple of dozen movies and offtentimes his pictures ("Malcolm X", "Get on the Bus", "Do the Right Thing") have to do with social and political issues including race relations. Today as we remember the life of Martin Luther King and his efforts to encourage equality for all, Phungo marks the occasion with the Spike Lee Phungo Card.

The photo was taken at the 2008 All-Star Sunday celebrity softball game at Yankee Stadium. This is the same game mentioned in the Rollie Fingers post earliar. Other celebrities that were involved in the game included Billy Crystal, one of the othre Baldwin's, Whoopi Goldberg, Bobby Flay, a couple of ESPN broadcasters and several other folks. Most of us know Lee as a Hoop junkie from his appearances courtside with the Knicks, but he is also a big baseball fan and often inserts baseball references into his films.

I gave Lee card number 42 as a reference to Jackie Robinson's uniform number. In the spot on the card which is typically reserved for the team name I have noted Spike Lee as a Director.

For more information on Phungo Cards click here.
Posted by deal at 3:11 PM