Today on Phungo Cards we bring you the very first Phungo Card from a team outside of the Phillies. And I also want to send a shout out to a Phungo reader TasteLikeDirt who has some very good news of his own. TLD was the first in with comments regarding the Phungo cards and I decided to post the only Athletic from the Phungo set for him. TLD has also posted some helpful photography info that I will try and take to the park with me this season. TasteLikeDirt features some great pictures of both the Oakland A's and Rock Concerts. It's always worth a look. 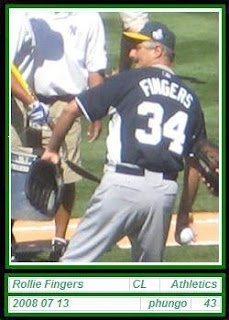 Rollie Fingers does represent the Athletics, who were the other team that once did play in Philadelphia before migrating first to Kansas City and then Oakland. Fingers was inducted into the Hall of Fame in 1992. His career spanned 17 seasons during which he saved 341 games. He was the closer for the A's three World Championship teams 1972-74.

I took this picture at a celebrity softball game played after the 2008 Futures game in New York. The first thing one will notice is that I have given this card a green inset border color to match the Oakland A's colors. I chose number 43 for Fingers, which is the reverse of his A's number '34'. I also have added the 'CL' for the position of Closer. Major League baseball has been tracking saves for what 50 years now, an abbreviation for Closer seems to be in order. The date on the card 2008 07 13 is the date of All-Star Sunday. In retrospect I probably should have worked in the HOF and induction year, similar to the Richie Ashburn card.

The fact that this card comes from a Baseball Old-Timers/Celebrity game gives me an 0pportunity to discuss the Baseball Hall Of Fame game.

I originally covered this in one of the very first Phungo Posts back in June. The annual Baseball Hall of Fame game no longer exists as it once did. Two major league teams used to meet at the intimate Doubleday field (capacity 10-12,000) in Cooperstown NY each summer to play an exhibition game. Major League Baseball has determined that it is no longer "feasible" to play this game.

I have never been to the Hall of Fame game, but it is a tradition that sounds appealing to me. I understand there are a lot of logistical issues with bringing two teams to Cooperstown, but I am of the opinion that the Hall of Fame game is not only important to the fans but to the players. Yes the baseball season is long and contains few off days and the players have all sorts of burdens regarding travel and road trips. They are also getting paid millions of dollars to play a game that doesn't exists without it's fans. I think it is important that each player respects the both the fans and the history of the game. For those reasons alone I think it is in their best interest to continue the Hall of Fame game tradtion.

I am interested in the opinions of Phungo readers. Is the Hall of Fame game a tradition worth continuing or is it to much of a burden to teams and players. What do you think of the alternative of the Old-Timers game. I think it would be nice to pair it with a Minor League all-star game. How about having the Futures Game in Cooperstown?
Posted by deal at 8:57 PM

The claim that it is a "burden" on players and teams and travel budgets is garbage. If they can fly to Japan for games, they can play a lousy single game in upstate New York.

What they have now -- a game between old-timers -- is a poor substitute. The Hall of Fame game didn't make enough money for MLB, so it got the ax. It's complete junk.

Night Owl - Excellent point. How is traveling to Cooperstown, NY a burden when they can find a way to do these dumb opening day celebrations in Japan, China, and Mars.

I'd like to have the Old Timer's Game in addition to the regular game. I mean, if you weren't a fan of the Royals and Twins, would you go up there to watch the game? Probably not. But if you're favorite childhood player was in an Old Timer's game there, then you'd at least consider it.

I think the HOF has a lot of work to do.

Yeah, the Red Sox traveled to something like 3 countries and thousands and thousands of miles, plus big long drawn out opening ceremonies at several games before they ever got home for thier home opener and more ceremonies before even one game at home. That's not a burden?