Today Cole Hamels signed a 3 year 20.5 M dollar contract with the Philadelphia Phillies. I don't think that Hamels would have been FA eligible before 2011, but this contract will save the Phillies and Hamels the hassle of going through arbitration this winter plus the following two. The contract is a annual rate record for a pitcher of Hamels tenure.

This also give me an opportunity to post a Phungo Card of Cole. If you have been following Phungo since the beginning of the month you know that we have been involved in creating a 64 card set of home made baseball cards.

In addition to the base set, I have followed the example of the big card manufacturers and created an Insert Set. These cards are simply called "Black Framed Inserts". This is the first Black Framed Insert that I have chosen to present. 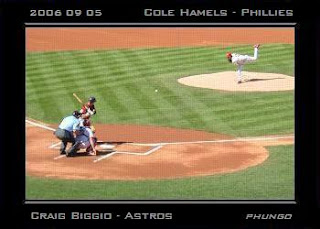 While I was hoping for a little bit more from a lot of my photos, I have generally been happy with the pictures I have picked for the Black Frame Insert series. Most of the cards are similar to the one above with a photo including both the Pitcher and the Batter. I framed the shots in black for a cleaner classier appearance and used a gray font for the text to give a metallic/silver/chrome look.

The photo was from a game between the Astros and Phillies on Labor day of 2006. This is the game I look back upon as the day that the Phillies had arrived. The Phillies had worn out their new stadium honeymoon with fans, and were dealing with some pretty negative publicity. Fan Favorite Larry Bowa had been fired and the oftentimes befuddled appearing Charlie Manuel had been hired. There was no end to the harsh criticism of Manuel and the Phillies management.

Cole Hamels changed this as much as anyone. On September 4th 2006 He faced Roger Clemens in arguably the best regular season game I have ever seen. The weather, as you can tell from the photo, was perfect. The Pre-Mitchell report Roger Clemens was a Future Hall of Fame pitcher, pitching in the middle of what would be his last good season (He pitched in 2007 but was much less effective). Cole Hamels was in his rookie year making his 19th career start.

Both pitchers were fantastic, Clemens only gave up 1 hit and 1 run over the first 5 innings before being removed due to an injury (hamstring if I recall correctly). Hamels bettered him taking a PERFECT GAME into the 6th inning. But the Clemens injury contributed to the breaking up of the perfecto. Carlton Jimerson made his first career MLB plate appearance pinch hitting for Clemens....Jimerson homered to deep to center.

In the bottom of the inning the Phils retook the lead on a Ryan Howard solo homer. Aubrey Huff countered with a homer for the Astros in the 8th. Hamels would be done for the day after the inning. He gave up only three hits, no walks, with the 2 solos homers accounting for the only runs he Hamels allowed.

The game went to extras when with two outs in the 10th Chase Utley homered off of Dave Borkowski for the win.

The game had everything. A perfect day with 2 incredible pitchers, Clemens and Hamels, at the top of their games. A home run in a players first career appearance (Jimerson) , a go ahead dinger by Ryan Howard, and a Walk-Off homer by Chase Utley.

One final unfortunate note on the Phungo Card. This is the first card that I have found an error on. I took the shot with my old camera, which attached the date that I uploaded the photos to the file rather than the date the picture was actually taken. When I created the card, I propogated the inaccuracy. Still I like the card and I doubt I will have any more errors than Topps.

For more information on Phungo Cards read this post.