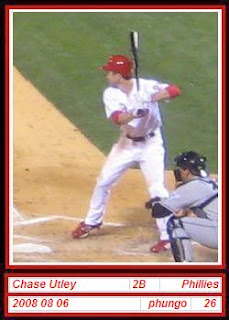 This is the first Phungo card I am featuring of an active player. I wanted to get a better picture of Utley as he is one of my favorite players, but while you are watching and photographing a game you fall into the trap of choosing one of the other. Once you start trying to take pictures you really cease being a spectator, which is really the whole reason I went to the game in the first place.

I would of liked for the shot to be from a more front on profile rather than this 3/4 rear profile here. You can also tell it is a night shot both from the graniness/fuzziness and the fact that Utley's uniform is washed out in white. The Fuzziness is also partially due to using MS-Paint. for some reason the fidelity of pictures degraded whenever I transferred the Photos to paint.

The fuzziness factor also carried over to the text in the information boxes at the bottom of the card. I am a big fan of being able to track a card to a specific game, and since I knew what games my pix were taken at I added that as a feature of Phungo cards. The date is given in YYYY MM DD format. This is for sorting purposes - I am a software developer by day and this is something that always makes things simpler in our field. Finally the card number is in the bottom right hand box. For many players I used their uniform numbers - This is a technique that Topps uses with their hoop cards and I liked it. I also like hero numbers so some of the players that got booted from their uni numbers ended up on the zero and five numbers (20/25/30)

Chase Utley needs little introduction. He is arguably the best hitter on the team - pretty amzing considering there are two players on the team that have won MVP awards in the last three years and he is not one of them.

I got a lot (4 comments on a post is a lot for me) of positive feedback on the originial Phungo Card post yesterday and it is much appreciated. As we go thru the rest of the set, please let me know of stuff that you like or would modify.

Moving on to the Spot the Sig! competition, PTBNL got another one and doubled. Night Owl Cards picked USC by 17 in the Rose Bowl. The Trojans won by 14, but Penn State had to stage a pretty big comeback late to make it that close and even almost made it interesting at the end. For picking USC by 14 NOC gets a Sac fly to score a well earned manufactured run.

We now have 4 players on the scoreboard with PTBNL pacing the competition at 4 runs.

For further information regarding the Phungo Spot the Sig! contest click here and join the party - you just may find yourself with a stack of cards come spring training!
Posted by deal at 5:53 PM

If there was a back of the card, I would say you could include who the catcher is. THere are people who like secondary cards.

But since, there is no back, no big deal.

I do like the cards. I say keep at it and the more you do, the better you'll get.

Thirty seconds later I thought of this story, you might find interesting.

I was at the Mets/Phillies game at the start of last season and the Phillies were warming up on the field. Greg Dobbs is standing in front of the dugout and a fan yells to him: "Chase, Chase sign my ball."

Dobbs takes the ball and pen (it was thrown to him) and signs it 'Chase Utley' and throws it back to the kid.

Yeah no card backs this year. If I am still blogging a year from now maybe.

I suppose there are some similarities between Dobbs and Utley.....no not really - well the kid is probably really happy - he thinks he really has an Utley Ball. Ignorance really is Bliss then.

I like the inclusion of the date the photo was taken.

There was that one late 90s Upper Deck set that included them, but other than that I've never seen the card companies bother. I guess they're too lazy. (And afraid to call attention to how long the recycle the same photos.)

The date of the photo listed on the card is great. I'd love it if card companies did that. But I see what Paul is saying. They could get themselves in trouble doing that.

The card looks cool, kind of reminds me of Bowman for some reason. And Sooz's story makes me laugh. That's one of my favorite stories.

The blasted out white details in uniforms is especially a difficult problem during day games. An overcast sky is your friend in photography. I guess that's something good about the alternate uniforms at home. (They're not white).