How many times do you think you will see these two guys in the same post?

Well there is a method to my madness - Sunday was Hockey day for STS! In celebration of the NHL All-Star game being played in Montreal (The East won in a shootout - Alex Ovenchkin hit the clincher) we selected a Montreal Expos auto and a Mr Hockey card for this weeks Spot The Sig! subjects.
Despite all of his antics and issues on and off the field I remain a fan of Milton Bradley. I like his funny name and the fact that way back in 1999 down by 3 runs in the deciding game of the Eastern League championship he hit a walk off grand slam for the Harrisburg Senators. At any level that is pretty exciting. Bradley is an offensive force who will be playing for the Chicago Cubs this year. If he can stay on the field and he should add even more pop to a quality lineup that already includes Derek Lee, Aramis Ramirez, and Geovany Soto. It will be interesting to see how Bradley performs under the scrutiny of Cubs media and fans - Chicago may not be New York, Boston, or Philadelphia but it ain't Montreal, San Diego, Oakland or Arlington either. 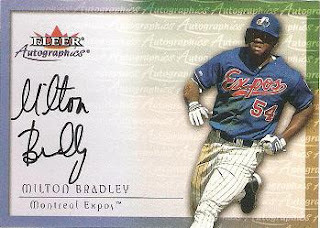 2000 Fleer Impact Autographics Milton Bradley
This auto is from the 2000 Fleer Autographics set. It's a good looking auto from early in Bradley's Career, although it appears his signature has devolved somewhat over the years. Milton Bradley Autos are running from $ 6-8 on ebay. I would think that they will increase in value as Bradley gains more visibility in Chicago. I got this one of eBay for $4.50.
The other card featured in the STS! is from the 2008 Goudey Hit Parade of Champions insert set. These are about as small a card as you will see on today's card market. I have been trying to mix up the bonus Q between baseball trivia, miscellaneous Phungo Phacts, and Cards past and present. I hope that has been an interesting formula for everyone. This week was a gift for anybody that knows a little hockey and was familiar with recent card issues. Hit Parade of Champions is a 30 card set made up of stars the four major sports past and present. The checklist includes Nolan Ryan, Yogi Berra, Cal Ripken, Lebron, Kobe, Gretky, Lemiuz, Peyton Manning, Tom Brady and many others. 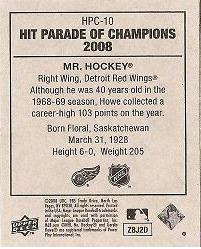 This card doesn't identify Gordie Howe by name on the back. With some dismay I must recall that a card blogger who did an early 08 goudey box break commented "Somebody only identified as Mr Hockey" when talking about the card. Howe is known as Mr Hockey for a reason, He was a member of four Stanley Cup champions, He won six league MVP awards (Hart Memorial Trophy) and six NHL scoring titles. His NHL career spanned Five, FIVE, different decades and he played a single game for the IHL Detroit Vipers in a 6th. There is an official Gordie Howe website where you can pick up autographed items as cheap $25 plus shipping (looks llike another $5). The site is actually dedicated to Mr and Mrs Hockey and mentions Gordie's wife Colleen several times.

%%%%%%%%%%%%%%%%%%%
He's back! PTBNL was the early in this week, and I suspect he Id'D the auto directly off the shot. Too easy this week. We will be back with something more challenging next weekend. With that PTBNL racks up yet another run. Cardboard Junkie got the bonus and now has a couple of runners in scoring position.
The current STS! standings after four innings:

PTBNL - repsresentin those Fightin Phillies - 6 Runs - Men on 1st and 3rd.
Night Owl - Dodgers - 1 Run in men on 2nd and 3rd
Stats on the Back - Mets - 1 Run in - Man on 3rd
Cardboard Junkie - Braves - 1 Run in - Men on 2nd and 3rd
Card Buzz - Angels - Chone Figgins on 2nd.
Cardboard Addiction - Bosox - Man on First
A Cardboard Problem - Yankees - Johnny Damon on first.
Covered in Wrappers - Cardinals - On Deck
Nachos Grande - Reds - On Deck
For further information regarding the Phungo Spot the Sig! contest click here and join the party - you just may find yourself with a stack of cards come spring training!
Also Very Important Information - Next Week's Spot the Sig! will be posted on SATURDAY January 31st.

If you think it devolved from your auto, look at this one.

yeah it is like two different people. Now that Bradley has some cash he probably has somebody else sign his autos for him.