Phungo Cards - Ryan Ludwick and Cards from Cards on Cards

Today on Phungo Cards we feature another player from a team other than the Phillies. This is for Cards on Cards who was good enough to send me a great bunch of minor league cards.

Ryan Ludwick played his first full major league season in 2008 and put together a fine campaign. The first time all-star hit .299 with 37 homers and 113 RBI, good enough to earn him a Silver Slugger award. It felt like he got about half those dingers vesus the Phillies. 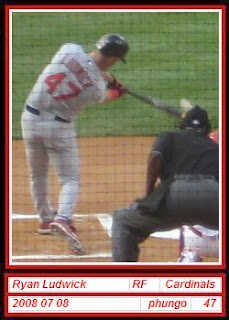 Nothing new on this card. I used the same color template for the Cardinals and Phillies. As noted with the Pat Burrell card earliar this week, I denote the specific position for Ludwick as right field. As you can see Ludwick's card number (47) matches his uniform number.

This card is from July 8th when Joel Piniero shutout the Phils. Ludwick was responsible for one of the two runs the Cardinals scored as he hit one of his aforementioned homers.

This is not one of my favorite camera angles, however anytime I can capture an action shot with the baseball actually in the picture I consider the photo a success. I also think I read at some point someone mentioning that there wasn't a Ludwick card available in Series 1 and I wanted to create a card for him.

While I am not fond of the behind the batter shot, apparently it is good enough for Topps, Especially if the batter is Casey Blake. 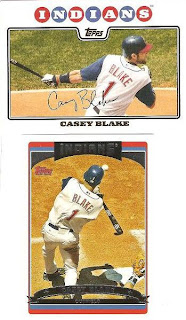 Here are a couple of the highlights from the minor league cards sent out by Cards on Cards. I had asked for Phillies minor leaguers and anything from my local minor league teams, such as Harrisburg Senators and Wilmington Blue Rocks. CoC sent me two team bags with lots of Phils. I particularly loved these two cards. 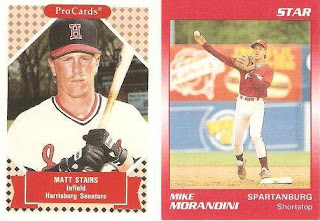 Mickey Morandini, Identified by his given name, Mike. And one of 2008 World Championship Phillies playoff hero Matt Stairs. Stair stole 23 bases for the 1991 Senators. Hard to imagine.
Posted by deal at 9:13 PM