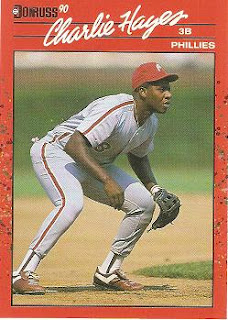 And even better, Brian the fearless leader over at 30-year Old Cardboard was good enough to contact me and let me in on some of his bounty. He sent over about two dozen cards including the Charlie Hayes card above.

First off let me note that 30-Year Old Cardboard has been a long standing member of the Phungo BlogBlogBlog roll. Brian is a Cubs fan with an affection for the vintage cards of their stars from the past. He is also very involved in TTM collecting and is currently involved in a nice series on great rookie cards from the 70s. Definitely check in with 30-YOC whenever you get the chance.

Charlie Hayes was one of my favorite players from some of the dreadful early and mid 1990s Phils teams. He was a line drive hitter with a real solid glove at 3rd base. Though he would probably be classified as a journeyman, Hayes was good enough to stick around 14 years with seven different teams.

I remember Charlie Hayes for two specific fielding plays. One was catching the final out of Terry Mulholland's no hitter in 199o. The other is for catching the final out of the 1996 World Series for the Yankees over the Braves - I was very happy for Hayes and the Yankees at the time...I suppose I didn't realize that moment was the beginning of the latest Yankees Dynasty.

In addition to playing in the MLB World Series, Hayes is one of the few Major Leaguers to also have played in the Little League World Series. Hayes was also the first choice of the Colorado Rockies in the 1993 expansion draft.

Currently Charlie Hayes is passing on his baseball expertise as an instructor at the Big League Baseball Academy in Tomball, Texas near Houston. Another former Phillie Mike Jackson also teaches at the Academy.

Charlie's son Tyree is a pitcher in the lower levels of the Tampa Bay Rays minor league system. A year ago he did not rank among the Rays top 30 prospects but he appears to have improved in 2008.
Posted by deal at 9:17 PM

The only thing I really remember about Charlie Hayes is listening to the postgame recap on the radio in my room when I was about 10 and Harry Kalas talking about what a rough night he had, grounding out to each of the four infielders.

Would you consider trading links with my two sites? If so, just email me at morehardball@hotmail.com