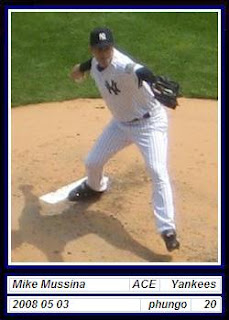 Today the Hall of Fame committee selected Rickey Henderson and Jim Rice as it's class of 2009. Henderson is an obvious choice and is going in on his first ballot, Rice is not as obvious and gets in on his last ballot. I haven't really looked over Rice's numbers, but from what I have read Rice's qualifications are certainly in the neighborhood. The only non-member that I know enough to construct an argument for would be Bert Blyleven and possibly Ron Santo.

What does this all have to do with today's Phungo Card? Well, if he remains retired, in 2014 Mussina will be on his first Hall of Fame ballot. At that time I am pretty sure that I will advocate his induction into the hall. If you want to see some of my arguments for Mussina's Hall of Fame credentials check out the Phungo post from November in reference to his retirement.

As far as the Phungo Card, I have selected a dark blue for the Yankees border color. Mussina gets a hero number of 20 for his card. I did this to represent his 20 Wins in his final season. His uniform number is 35, I will let you ponder who got that number instead over Mussina. You may also notice in the player postion I have added the designation of ACE. I have annoited certain pitchers as Aces if I think they are the top pitchers on their staff. I am sure this can be debated during Mussina's career in New York. He may not have always been their ace but over the last 5 or 6 years he has certainly been one of their steadier pitchers. This picture was taken on May 3rd of this past year. It was a Saturday day game. Mussina pitched well giving up one run over six innings scattering 7 hits, all singles. Good enough for Career win #254.

I hope that Mussina gets one more victory when they announce the selections for Cooperstown five years from now.

If you want to know more about Phungo Cards, read some background here.

There was another reason I selected Mussina today, I wanted to recognize the great young ladies over at A Cardboard Problem for getting into the Heavenly 7. They are of Yankee fandom and put out quality work that is both informative and funny - Best of all they drop by here to comment occasionally and are also active participants in Spot the Sig!

Speaking of Spot the Sig! Night Owl Cards got this weeks STS! and broke PTBNL string of four consecutive STS! victories. I will have more on Alex Rios and the autographed card later this week. Tonight, however I am hoping to do some streak busting of my own. If you were with us last night, you now that Team Phungo is in a Phillies drought. We have opened 18 EIGHTEEN!!! consecutive packs and not drawn one Phillies card. Can you believe that??

This is the first pack, 08 UD Masterpieces. I think at least two of our participants picked Masterpieces and I appreciated it. Here goes. RIP!!!

#36 Miguel Cabrera
#8 Jim Palmer...funny doesn't look like Palmer
#60 Whitey Ford and I think I have this card already.
#39 Roy Oswalt

bummer 19 packs and still no Phils.

Sorry Sooz, Sorry Fan of Reds. No Phils in the Masterpieces Pack. Tomorrow or Wednesday I will have a Post on the 05 UD MVP, which was only picked by DayF.
Posted by deal at 10:36 PM

I get Phillies all the time. I really thought it was going to be the Masterpieces.

Yeah go figure, for me it's just another one in a long of packs with no Phils in it.

I think I am done w/ Masterpieces for this year after this blaster is finished.