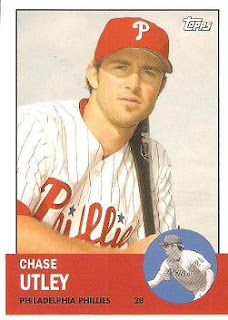 Thorzul Will Rule recently held his own Group Break. Thorzul is very creative and ran a totally different spin on the group break. Instead of getting a High End product and having everyone put in $20 or $30 for a chance at a couple of Autos, he went the direct opposite route. He went low-end very low-end. Thorzul busted open about a bushel of cards from various repacked products. For Five count-em just five bucks you got into the group break and received all the cards from a specific team.

Naturally I picked the Phillies and I got 29 of em.

The Utley WalMart card above was the Highlight of the set for me. I love the Heritage sets, in 2006 Topps put together a WalMart only insert set of superstars on different Topps designs from the past. This was basically the predecessor to 2008's Trading Card History, I suppose. One interesting difference between the 06 WM cards and the 07s and TCH is that the 06 versions come with stats on the back.

One of the other highlights was an 06 Turkey Red Utley Insert which Thorzul featured. Thorzul is correct btw, For about a month after the World Series nothing bothered me - but the High does wear off. I have tried not to get to involved in worrying about Hot Stove topics etc, but slowly I have returned to my crumundingly normal self - still if I ever get down, I always can think of the World Series and it helps.

The remainder of the lot consisted of a nice mix of Phils past (Bedrosian), Present (Victorino), Retro (Ashburn), Gems (Daulton) and Duds (Freddy Garcia). Out of the 29, 20 to 25 were new to the Phungo Collection and well worth the price of admission.

Thanks to Thorzul for dreaming this up and going through all the work of sorting packing shipping etc. I hope he runs one of these again in the future.
Posted by deal at 12:11 PM