For this weeks Hall of Fame Thursday I am featuring the last of the 2008 Philadelphia Sports Hall of Fame inductees Mickey Vernon. Vernon died in September and I posted his 1962 card here.

For today's post I stopped by the Philadelphia Suburb of Marcus Hook where Vernon was born and raised and took some pictures. Marcus Hook has erected a statue in Vernon's honor and named a park after him. 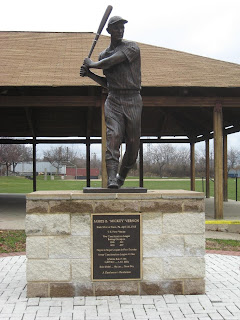 You can click on the photo above to enlarge. The Plaque states that Mickey Vernon was born in 1918, served in the Navy, Led the AL in Hitting twice, and was a 7 time American League All-Star. The plague concludes by stating that Vernon was a "Role Model ... Mentor ... Great Guy" followed by "A Gentleman's Gentleman". There is no need for me to add anything beyond that glowing description.

Here is a picture of Mickey Vernon Park which sets next to the Vernon Statue. In the rear of the Photo you can see the stands for a little league field. Click on the photo to enlarge

This concludes the Phungo Salute to the 2008 Philly Sports Hall of Fame inductees. Recapping this years class included:

I hope everyone has enjoyed reading about this years Philly Sports Hall of Fame class. Next week for Hall of Fame Thursday may just content a recent inductee...
Posted by deal at 10:08 PM