To start of the New Year we are today debuting for the first time ever Phungo Cards. Yes, you heard correct team Phungo has been working very diligently over the last couple of weeks and has now put together a set of trading cards as a companion to the Phungo blog.

This is also the first day of the year which makes the Phungo cards The first card set to be released in 2009. We are very proud to announce that the first card in the inaugural Phungo set is of Phillies Hall of Famer Richie Ashburn. 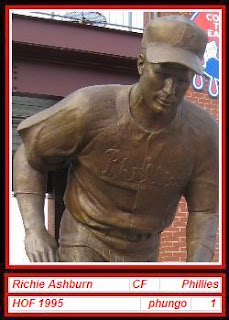 Today is also a Hall of Fame Thursday which makes Richie Ashburn a very appropriate subject for the first Phungo card. It is the first day of the first month and Ashburn's uniform number was also #1 - A perfect opportunity to recognized one of Philadelphia's great baseball Icons.

I recently went on a brief rant about topps Photography in a comment over at Night Owl Cards. I was almost positive, I could get better looking card shots then Topps. And I did on a few cards not a lot but I am pretty happy with the pictures I have taken.

Part of my inspiration came from the pictures taken by Mario over at Wax Heaven. My photos are no competition for Wax Heaven - I think Mario knows a lot more about what he is doing, has better equipment, has much better access than I do, and he is just plain and simple a better photographer.

My other inspiration was White Sox Cards, where Steve sought out to produce a card of every White Sox from this season. Once again my design is pretty simple, restricted to my meager skills with MS Paint, but functional - not nearly the caliber of White Sox Cards.

Thats where I started. I wanted to see what it would take me to design a set of Baseball cards. Just me a crew of one. I ended up with 64 cards that I thought were presentable to some degree. I shot and cropped all of the pictures, created the card design, and proofed all the text on the cards. I did the entire project over the last two months and was pretty happy with my output. My design was no-frills. Mainly I wanted to see what it would take to create a decent set of baseball cards.

There are bunches of subjects I have created cards for, they are not all statues like the one of Ashburn above. I hope you enjoy them.

After spending two months editting and selecting pictures I am mostly left disappointed with Topps. I am sure they have hundreds of Photos to choose from. I restricted myself to shots that I took. My picture were often taken more than 30 rows from the field. Several shots were taken from the upper deck. I used a fairly inexpensive digital camera with a modest but efficient zoom capacity. The 64 photos I came up with are not all baseball card worthy, but a few are. It amazes me that a company with Topps resources couldn't do better.

The cards are largely Phillies, but I did get players from about a dozen other treams, which should keep you non-phils fans interested. And I think I have 1 or 2 cards of players that have not gotten cards with their current teams yet. I drew from Allen & Ginter a tad and produced some Phungo Cards of non-baseball subjects.

Let me know what you think of the cards and a Happy New Year's to everyone.
Posted by deal at 2:21 PM

Excellent! I've often thought about doing the same thing, and I also have been very frustrated about the "lazy" Topps photos on thier base set.

Yes, TLD, I wish I could pictures like yours on my topps cards.

Everything is so green in those A's Pictures.

The A's don't make it out here that often - but I did find a way to get and A's card into my set.

Great idea and thanks for the compliment. Sadly, my equipment is not as good as many others but I make use with what I can afford.

What are you using?

WH, Canon Power Shot 560. It does well for the Day Shots, but at night everything is too grainy. I really love the camera, but probably will upgrade maybe next year. I would like to get moe zoom. the 560 has 4x optical.

I have been learning as I go and wanted to get some action shots - those for obvious reasons were the toughest. I know I have 1 Marlin in the Set possibly 2.

This is pretty awesome. When I learn to use photoshop, I intend to do something similar.

deal of the day

So what do I have to do to get a pack of your cards? They are pretty cool. I've thought about making my own set if I had more time/money. I have the design templates ready, I just need some free time..