Fielder's Choice has reported that Pat Burrell has signed with the Rays, and Dave sounds pretty excited about the news. I agree, Burrell will be a nice addition to the Rays lineup.

For the past nine years Burrell has put on a Phillies uniform and gave the team his best effort every single night. The man may have some holes in his game but he ends every year with around 30 dingers, 100 RBI and you can't forget the 100 walks he works each year. Burrell will forever be the starting Left Fielder for the 2008 World Champions and he will be missed.

I am glad to have watched his career unfold over the past 9 years and very happy that I was there for his last game as a Phillie and witnessed his final hit - a double he crushed high of the left centerfield wall in Citizens Bank Ballpark. The hit would be the eventual clinching run in the 2008 World Series. 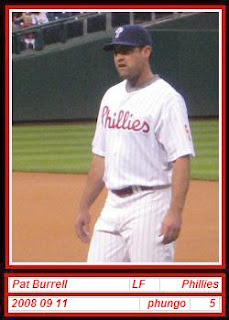 This is my Pat Burrell card. You can see Burrell is wearing the patriotic blue Phillies cap. This game was played on September 11th and all Major League teams were wearing the caps in memorance of the tragedies victims.

The card number is 5 to match Burrell's uniform number. On Phungo Cards I have designated the specific Outfield position (LF here) rather than the generic OF. Not sure why the card companies would have any trouble doing this - get with the new century folks. The shot was taken early evening at a bit of a distance, hence a little graniness.

I am happy that Burrell signed with the Rays. They were a likable series opponent, who will be coming to Philadelphia in 2009 and I look forward to seeing him play for them.

Here are the pix that wound up on the cutting room floor of Phungo Card HQ. Both photos were taken prior to Game 5 (part 2) on October 29th. 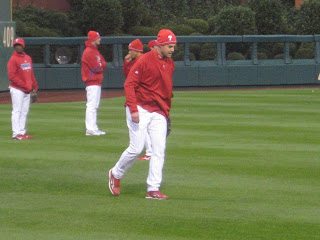 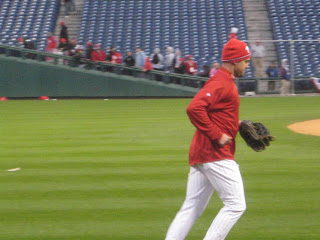 For a very good profile of Pat check PTBNL's entry on Auto-Matic for the People.
Posted by deal at 7:11 PM

PAT! I'll miss him, but at least he's not a Met. Now I can root for him wholeheartedly. The Rays just replaced the A's as my AL team.

Hopefully he'll be the DH of the 2009 World Champions!

You know what'll be funny? When Burrell shows up in the Rays clubhouse with his 2008 World Series ring. That ought to really motivate the team to get back to the Series and win it.

Don't the Rays play the Phillies in an exhibition game before the season at CPB? Or are people just telling me lies?

I always liked Pat. Since I live in Houston I didn't get to see him play often but have followed his career. I was at his debut game on May 24, 2000 in Houston.