It has been an eventful week during the off season for JC Romero. As has been reported JC was suspended for 50 days due to a violation of the MLB substance abuse policy. It has remained somewhat unclear as to what Romero was taking and whether or not he knew the substance was illegal. 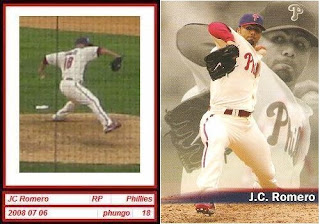 I am curious if anyone has obtained a license for the commercial card. It only says that the Photo is courtesy of the Phillies. The card is apparently from a religious set of cards. Romero lists two scriptures that have inspired him Matthew 5:16 and Phillippians 4:13. The latter scripture is a little curious considering the predicament that Romero finds himself. Some folks not familiar with the 2008 World Series may dismiss Romero as merely a set up guy, but baseball has changed. JC Romero was an absolute critical piece of the Phillies World Series Vicotry. He won two World Series games and served has a quality left-hander out of the bullpen. The season, playoffs, and Series could have been significantly different without him.

There is definitely something odd about how the whole suspension has transpired and the lawyering done by the Phillies, MLB, and the Players Union. Why was Romero offered a lighter penalty, why did the players union offer up only a muted opposition. Where are the Phillies trainers in this whole situation. It is all pretty sordid. Going forward the Phils will be without Romero for 1/3 of the '09 season and will need Scott Eyre to step up and the rest of the bullpen to step up.

Finally I am getting to the Phungo Card. I have used the designation RP for Relief Pitcher. Remember from the Rollie Fingers post that there is a separate abbreviation, CL for Closer. I elected to crop this picture smaller than the typical frame for Phungo Cards - I most likely took the shot from a distance without using the zoom so Romero came out quite small. The card number is 18 matching Romero's uniform number and the picture was taken on July 6th which was a tough extra innings loss to those stinkin' Mets. It rained a lot that day and the game took forever.
Posted by deal at 7:41 PM