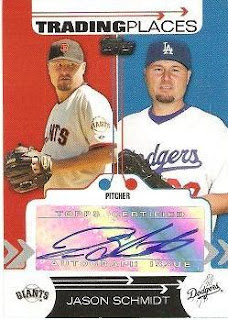 I am sure this card makes many a Dodger fan cringe. Schmidt is going into the final year of a three year 47 Million dollar deal with the Dodgers. So far the Dodgers have gotten 26 innings and 1 victory out of Schmidt. This is all very unfortunate for Schmidt and the Dodgers. Prior to the signing, Schmidt had been a very steady pitcher averaging 200 innings from 2001 thru 2006.

We have a new player in Spot the Sig! this week. Phungo would like to welcome Laurens of Card Buzz as he joins us with a Chone Figgins lead off double. It appears that Laurens hails from southern California, and perhaps he is familiar with Jason Schmidt from his big 30 innings with the Dodgers.

The Jason Schmidt auto is pretty sloppy, but once you know it you can make out the Schmidt portion. Perhaps I should have gone triple here, but I left a small portion of the red and blue from the Trading Places template. I figured this might be a hint to any collector who remembered this set from 07.

It isn't very surprising that the Jason Schmidt Autos running on ebay are getting no bids. I think I may have gotten this card with a lot of autograph cards that averaged about $3 each.

I picked the Trading Places card this week because we as a nation are basically trading Presidents. See, I actually do put some thoughts into this some weeks. Regardless of your persomal politics, I believe that one would have to consider this years inauguration of definite historic siginficance.

PTBNL and Sooz were both able to pick up the bonus - Although......perhaps I should penalize PTBNL for not following instructions....I will forgive it - PTBNL puts runners on the corners and Sooz gets her first baserunner.

One last quick note on Card Buzz, Laurens has a post on Arizona Cardinals Wide Out Larry Fitzgerald. Unless you live in Arizona, play fantasy football or watched the Eagles debacle this past weekend you may not know much about Fitzgerald.

I have been following him since his days at Pitt, and I think Larry Fitzgerald could very well be the best reciever in football for the next 10 years. Card Buzz makes a similar lofty comparison. I don't think the Cards have a chance against the Steelers but if they hang in there, I am sure Fitzgerald will be one of the reasons.

For further information regarding the Phungo Spot the Sig! contest click here and join the party - you just may find yourself with a stack of cards come spring training!
Posted by deal at 7:37 PM

Gee, I probably should've gotten that. I have that card, and I'm certainly familiar with Schmidt.

Sorry about not following directions. I just get so excited about Spot the Sig I just jump right into it. Were my 6 right?