Night Owl Cards took this weeks Spot the Sig! NOC has been very active with the bonus questions and has even managed to score a run via the bonuses. This week he was the first one in to spot Alex Rios. 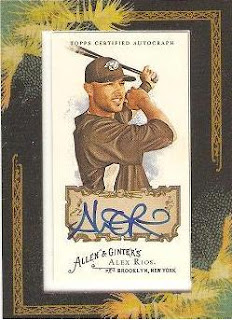 I pulled this from the first pack of Allen & Ginter I picked up this past year. This Rios Auto as well as other low-end Rios Auto's sell for about $6-8 on ebay. There are a variety of other dual autos featuring Rios that go for a few dollars more. That is probably about where the price point should be. Rios looks to be an above average hitter ready to hit his prime. Playing in Toronto probably holds down his value in the card market.
Night Owl earned a Russell Martin Double for getting the STS! this week. With that he also pushes a runner to third setting up a couple of runners in scoring position and a possible big inning.

The second order of business is to straighten out the Bonus Question. This is my quest to get at least one Phils card out of a via ripping open a pack - This has not happened at Phungo Head Quarters in 19 Packs. 19 Frigging Packs. This is pack number 20. Is it the streak buster??. The pack we are ripping open a pack of 2005 UD MVP cards - 6 Cards - This pack came out of a Fairfield Repack, and I really don' t know that much about what they look like. The only person to pick this pack is DayF. Here goes. RIIIPPP!!!
#59 Nomar - Close - He's not a Phil yet and not a Phil on this card - He is a Cub though - 2005 likely one of his first Cubs cards.
#49 Jose Vidro - likely one of his first cards as a Nat
#28 Garret Anderson - Underrated here on the east coast. couple of good years this guy might be in HOF conversations
#15 Delgado - Another guy that may get himself into the HOF discussion someday
#47 Johnny Damon - A Phungo Favorite
And I don't believe it!!!!..... 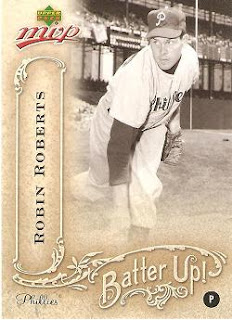 I finally get a Phils Card!!! Whoohoo!! - and Congrats to DayF on getting the bonus. but even more amazingly he picked the exact card. Check his comment here. I will refrain from awarding a double bonus for that but let me just say the man knows his cards. The bonus is improved this week however so Dayf gets a single and advances a runner to 2nd.

So lets summarize.
The current STS! standings after 2 innings.

I must also mention that we welcome the Cincinnati Reds Representative Nachos Grande to the game. You are on Deck - best of luck. I encourage folks to keep participating, I don't think PTBNL is out of reach yet.
For further information regarding the Phungo Spot the Sig! contest click here and join the party - you just may find yourself with a stack of cards come spring training!
Posted by deal at 11:29 PM

Woo-hoo! In second place, but still way behind PTBNL. I guess I have to break out the rally monkey.

CALLED IT!!! I love those Batter Up cards!