I have Red Schoendienst's 1974 Topps manager card from when I was a kid. Anytime I looked at that card all I thought was "Man that dude is old" - and truth be told I was sort of right - he was 50+ at the time. Back then the only people I knew that were older than that were my grandparents. Now half the people I know are approaching 50 and some have already passed the number. 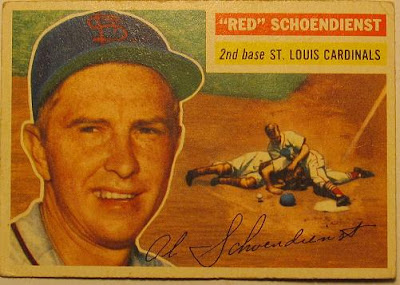 Red's HoF credentials appear pretty  mediocre.  Most noteworthy number is probably his 10 all-star teams. He did amass 2449 hits and scored 1223 runs.  Among his best seasons was 1953 when Schoendienst finished 4th in the MVP voting when he batted .342 with 15 home runs.  The 1953 NL MVP voting has to be one of the best ever - The top 6 finishers are all in the Hall, Campanella, Ed Mathews, Duke Snider, Schoendiesnt, Spahn, and Robin Roberts - on top of those heavys there was also Stan Musial who finished 8th.

Schoendienst was also a member of two World Championship teams, Cardinals in 1946 and the Milwaukee Braves in 1957.  Schoendiesnt was only a year removed from playing when he became the Cardinals manager in 1965 - The Cards won the World Series in 1967 followed by an NL pennant in '68. He remained manager through 1976.

I think Red Schoendienst became a Hall of Famer on his cross discipline record.  He had success as both a player and manager.  Similar circumstances should lead to Joe Torre's induction in the near future. In 1990 At the age of 67 Schoendienst returned to manage the Cardinals for 24 games - He has to be one of the few men to manage in 4 different decades.

Awesome card... love the 56T design. I wish I grew up in that era... just so I could know how to say his name correctly.