For the first time in my life everybody single player on an Opening Day roster was younger then me.  The last man to take the field that was older than myself was gold glove shortstop Omar Vizquel. 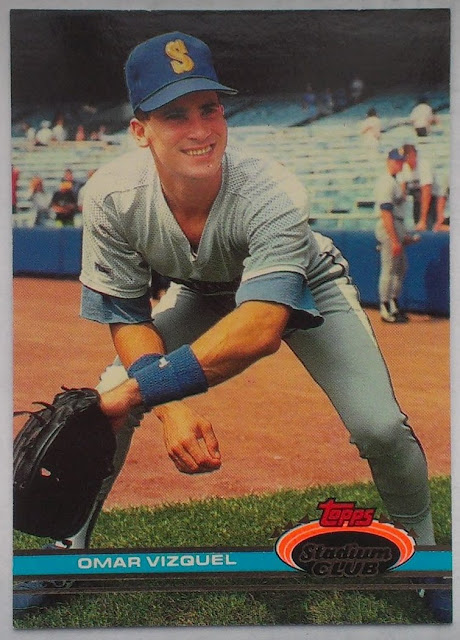 Vizquel and Phungo favorite Jamie Moyer were the last two guys to play that were older my present 45. Omar Vizquel turns 46 today. It is an odd milestone, and really only meaningful to myself.  Regardless I did note its passing with a pang of sadness.

Hall of Fame Resume
Omar Vizquel came up with the Mariners in the late 80s and was traded to Cleveland following the 1993 season to make room for some big prospect that would turn out to be a steroid gobbling oddball.

In Cleveland Vizquel made 3 all-star teams and was the starting Shortstop for five consecutive playoff teams, The Best of which were the 97 Indians who took the Marlins to extra innings in game 7 of a very memorable World Series.  For his career Vizquel appeared in 57 Postseason games. His postseason numbers include 23 Stolen Bases in 26 attempts.

Vizquel is a borderline Hall of Famer - He would get my vote. The four decade mans big stats are largely accumulaters but he did it as a good glove man at a premium position.  His career BA of .272 may not be impressive but he did rack up 2877 Hits.  There are only 3 HoF eligible players above Vizquel in Hits that are not in the Hall (Bonds, Rafael Palmiero, and Biggio).  The only Shortstops ahead of Vizquel are Jeter and Honus Wagner.

His defensive accolades include 11 Gold Gloves (2nd only to HoF Ozzie Smith),  Most career Games and Double Plays had Short, and 2nd in career fielding pct (Troy Tulowitzki) 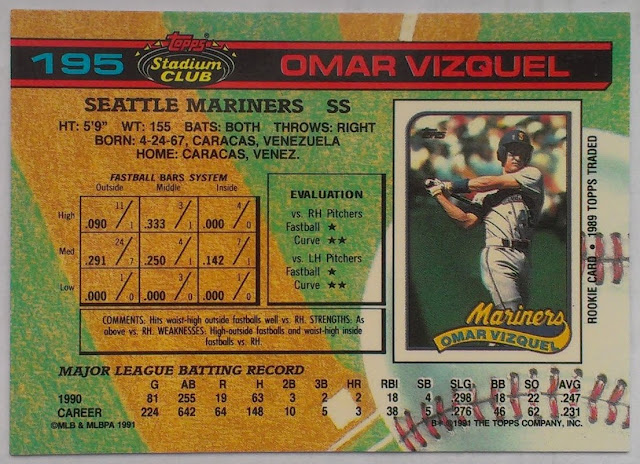 This is an early Omar Vizquel card. I like how Topps posted the players RC on the flip of Stadium Club Cards.  It was one way that Topps could take advantage of their history in the Hobby.  If Vizquel does get into the Hall, I think his Rookie card will still be found at reasonable prices as 1989 Topps are pretty ubiquitous. Not sure that this is also true for the traded set, but it looks like you can pick up the complete 132 card set for under $15 and it includes the Topps RC of both Ken Griffey Jr and Randy Johnson.
Posted by deal at 11:11 AM