This year marks the 30th anniversary of the 1983 Phillies Wheeze Kids team that won the NL Pennant and faced the Baltimore Orioles in the World Series.

Throughout the season I plan on taking a look back at some of the members of this special team. 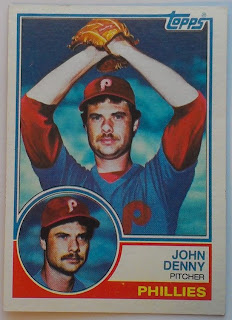 1983 Topps #211 John Denny
John Denny was a good pitcher that had one great season which occurred in 1983. Denny went 19-6 for the year with a 2.37 ERA and won the Cy Young Award.  It was a significant spike in a 13 year career and the only time that John Denny ever received a Cy Young vote.  His 1983 WAR of 7.6 also led the league for all players, not just pitchers.

It was also the only season Denny reached the post season. He got the W in the game 1 of the World Series, giving up only 1 run over 7 2/3 inning. Unfortunately it was the only game the Phillies were able to take in the series.

1983 was John Denny's first full season with the Phillies. He stayed through 1985 compiling a 37-29 record with the team. He retired following the 1986 season which he spent with the Reds.

He worked with the Arizona Diamondbacks in the early 2000s but appears to currently be away from baseball. I did find this interesting interview over at Baseball Analysts

The 1983 Topps John Denny Card recently made the Top Ten Terrible Airbrush Jobs  over at Hall of Very Good.