The Phillies are in Cincinnati to face the Reds this week and today I would like to take a look at Hall of Famer Tony Perez.  Perez was a member of the Big Red Machine teams of the 1970s as well as the Phillies Wheeze Kids squad. 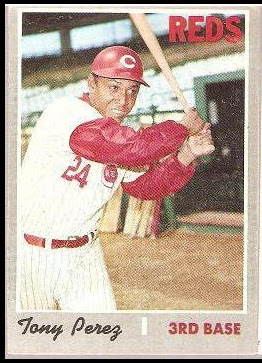 The "Wheeze Kids" were the 1983 Philadelphia Phillies - the monicker was a play on "The Whiz Kids" who were the much younger 1950 Phillies. Despite the differences in player ages the two teams had some things in common, most notably representing the National League in the World Series.

The Wheeze Kids had several former Big Red Machine stars on the squad including Future Hall of Famer Joe Mogan and current baseball exile Pete Rose. The other notable Red and Future HoF was Tony Perez

Perez's Hall of Fame resume includes 2 World Championships(75-76) with the Reds. In addition to those World Series squads and the Phils 83 team Perez was also a member of 2 other Reds NLCS teams.  Tony Perez made a total of 6 trips to the postseason - amassing 189 Plate appearance which is pretty good for the era. He has 6 post season Home Runs including 3 in the 1975 World Series v Boston.

Wiki
Tony Perez was born in Cuba and was signed by the Reds in 1960.  Apparently he was able to get out of the country prior to the aftermath of the Cuban Revolution and severing of ties with the US. Perez has been allowed to return to Cuba a couple of times, His son Eduardo played for the Reds and has been a commentator for ESPN.

1970 Topps #380
This card has some new information to me.  To me Perez was always a first baseman.  The Reds Thirdbaseman of the 1970s was always Pete Rose.  This of course is not true if you go back a few years.  In the early 70s Perez was the 3B and Rose was playing Right Field - one of many positions the gambler would play.

Perez came up as a 1st baseman, but moved to 3B for a few seasons, to accommodate Lee May.