This card is a Black Framed Insert (BFI) from the 2013 Phungo Set. 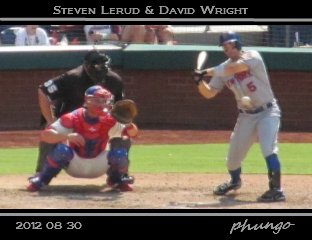 It is definitely blurry but I love this shot. Getting a photo with the ball in motion isn't easy.  You have to have the right timing, lighting and vantage point. As a fan the closest I can get to the field at this angle is beyond the center field fence - thus the fuzziness.  One advantage of making baseball cards is there small size - it covers up a lot of out o focus issues. Really the only way to tell this is David Wright is his stance and his number on the front of the uniform.

I also like that this is a game that Steve Lerud is catching.  A couple of roster issues, injuries, and the Phils dismal 2012 season gave him a major league opportunity - The Photo on this card is from Lerud's major league debut. Lerud is still in the Phillies systems with their AAA affiliate in Lehigh Valley.

David Wright and the New York Mets are in town this week. Concensus seems to be that the Mets are in for a long season, but they are 4-2 while the Phillies are off to a rough 2-4 start. The Mets come into Philadelphia for 9 or 10 games every season, but somehow Mr Wright had avoided my lens. I plan on getting down for one of the games this week, if there are any Mets you would like to see on a Phungo card let me know.