Despite the crummy game and weather we had a decent night and did get a couple of pix worth noting.

The flags were at Hall-Staff as a memorial and tribute to the victims and heroes involved in the Boston Bombings. 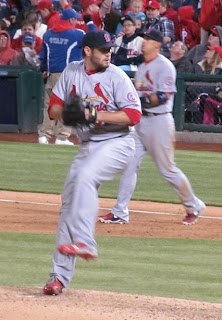 The star of the game was Cardinals 25 year old pitcher Lance Lynn who tossed 7 innings of 1 hit ball. This is a photo of Lynn tossing a warmup pitch late in the game. The lone hit was a leadoff double by John Mayberry Jr on a 3-2 pitch leading off the 5th. 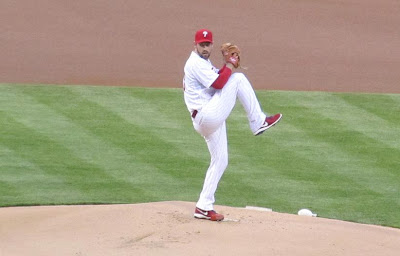 Cliff Lee pitched poorly - He only got in trouble in only one inning, the 3rd, when he walked the bases loaded in front of three consecutive singles, but that was enough.  He was never on the whole night, He went 2-0 on the first two batters of the game and went ball 1 for all four batters he faced in the first.  His fastball was high frequently throughout the evening. 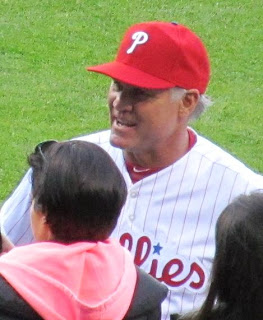 The Phillies new third base coach Ryne Sandberg chats with friends and fans pregame. With each passing game Sandberg looks like the next manager of the Philadelphia Phillies. 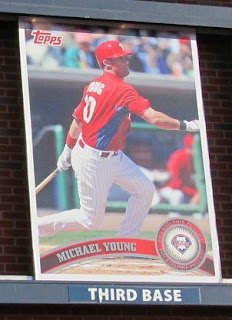 Two years in the Phillies starting lineup cards still feature 2011 Topps. 2011 was, of course, the last time the Phillies made the post season where they were eliminated by this weekends opponent, the St Louis Cardinals. 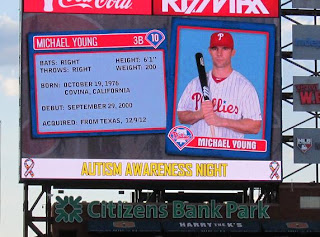 This season the Phillies also feature these Scoreboard Bios that have a Baseball Card Motif.  The design echoes 2003 Topps.