Tonight Jonathan Petttibone makes his major league debut with the Philadelphia Phillies.  One of the happiest folks today win or lose will likely be Jay Pettibone. 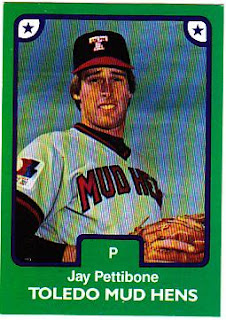 Jay Pettibone made 4 starts for the Minnesota Twins during a September call up in 1983. That is the the extent of his Major League career.  Pettibone's best start was probably his major league debut - He threw a Complete Game versus the Kansas City Royals. Pettibone entered the 9th inning having only given up 3 hits and 1 run - However the Twins had also only scored a single run.  Pettibone retired the first two batters in the 9th before giving up a single to Hal McRae followed by a Willie Mays Aikens dinger.  That was all the Royals needed - Dan Quisenberry came in and pitched a scoreless 9th and Pettitbone took the loss.

Jay Pettitbone got 3 more starts for the Twins and took the L in all 3 starts.  He ended his career with an 0-4 record in 4 career starts - the highlight was probably that first start v the Royals.

Hopefully Jonathan Pettibone has a longer career then his father - regardless I hope both men have a good night this eveiing.