Why would Chase Utley STAY in Philadelphia?

This spring Chase Utley was coming off of two injuring riddled seasons. A large question lingering for the Philadelphia Phillies was whether or not they should re-sign the all-star second baseman who is set to be a free agent at the end of the season.

To me that has all changed.  Utley is off to a good start, the Phillies not so much. 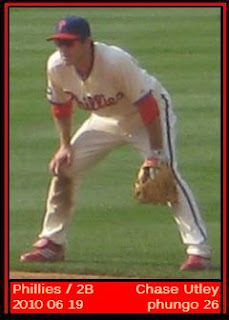 Chase Utley is batting .309 with 4 Homers and 16 RBI with an OPS+ 144 during the early part of 2013. This project to just a tick under his best career years. True he has been worthless v LHP (.200 BA/ .273 OBP/.450 SLG) to the point where he bunted to get on TWICE during the Pirates series, but the overall number still stand up.

This brings up the question with Chase Utley getting this kind of production and the Phillies treading water in neutral at best.

Why would Chase Utley want to remain with the Philliies?

The Spring Traing Q has been reversed.

The Phils keep saying they want to get younger but they don't.  Even with Utley and Ryan Howard in the lineup they are plaqued by the same issues they had in 2012 - General lack of scoring and scoring Opps and bad 7th & 8th inning relief.

A player of Chase Utley's caliber and age (34) may not want to stick around for the Phillies youth movement and I see him both A) getting traded  and B) becoming a free ageint.  Buster Olney mentioned both the Orioles and Royals as landing spots recently.  I would love to see him play for the O's as they are the Team Phungo AL home team.  I really can't stand to see him go but that would soften the blow.

I for one don't want to see him back. His degenerative condition is only going to get worse. It severely impacted the Phillies in 2011 and 2012, and was made worse by him concealing the severity of his condition from the team management (as far as we know).

As you said, the team needs to get younger. The Phils shouldn't compound their mess by re-upping Utley, who (by chance) is having a good start in this, his contract year.

Take a lesson from the Bynum fiasco.