In the wake of the news regarding Bill Mastro and the t206 Honus Wagner card, I would like to issue the following statement:

I have an admission of my own.  I am also guilty of altering a card to increase the value. 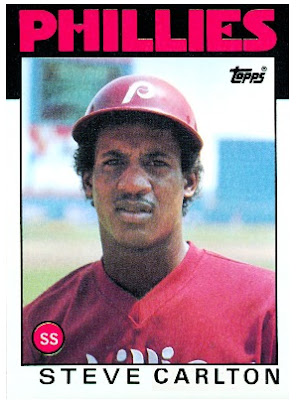 Yes I am guilty of altering the above Steve Jeltz card to sell it at a profilt. The dime I recieved for the card is far far more than it was worth in the original condition.

In fact the windfall I gained from the exchnage was likely far greater (percentage wise) than the amount Mr Mastro profitted from the sale of the T206 Wagner card.

I appologize to my family, friends, and the fans for the embarassment and hardship that I may have caused them.

Thats a 1 of 1 rookie card! Gotta be worth millions!

You probably should have given him a nosejob while you were at it.

Darn it! Now my Carlton Topps collection is incomplete. Shame on you Phungo!