There are a lot of bigger names at this weekend Poppel Show at the Granite Run Mall, but none of those guys are Phillies Alums. 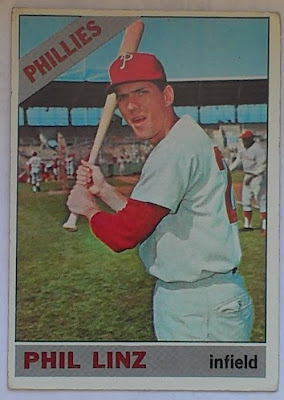 Phil Linz played two unremarkable seasons for the Phillies in the middle 60s. His Phillies tenure like much of his career was spent primarily as a utility infielder and pinch hitter and runner.

As a Yankee Linz did have a brief shining moment. He batted leadoff for the Yankees in game 7 of the 1964 World Series and with 2 outs in the 9th inning hit a Home Run off of Bob Gibson.  Unfortunately for the Yankes and Linz, they were down 3 runs at the time.  Gibson went on to record the final out, the Yankees would not return to the post season for over a decade.\

The 1966 Topps Phil Linz card is the final card of a somewhat scarcer middle series in the set.  For commons in this series I look for a pricepoint of around $1.50

I enjoy the Poppel Shows.  There are probably less than a dozen dealers but they have a strong enough variety to enjoy a couple of hours. The bulk of this weekends signers are Football Related, Ricky Watters, Charlie Garner, Keith Byars, Blair Thomas, Current Eagles RB Bryce Brown.  The big Baseball name is Expos Ace Steve Rogers. The others are Tito Landrum, Jack Fisher, and Linz

More information on the show can be found at Poppel.com.