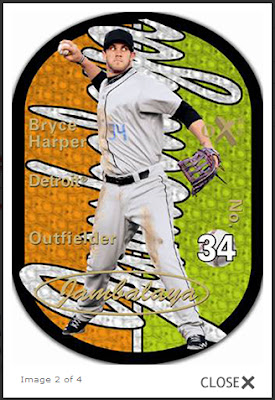 It was good to see UD went all out when sending out their promotional materials.  They get a big star and they got lucky as Harper bumped his Q-Rating with a noteworthy Opening Day performance.

You would think a multi-million dolar company like Upper Deck might put as much effort into returning to baseball as Bryce Harper puts into his game.  Unfortunately they do not appear to have done so.

Yes I realize this may only be a mock up for a some quick pub - but how the hell can you get the Team Wrong? Detroit!! - I was trying to figure out of Bryce Harper had some sort of Detroit on his resume.  Near as I can tell no College or High School there.

The design is based off a Basketball insert set that was issued in 1997/98 so that may have thrown off UD. But those card featured nicknames not city names, so that text had to be changed regardless.

I honestly don't get it.  Maybe I am missing something here, but it is like they put in no effort at all. Or they are leaking a gimmick to get some press.

Do the Nats have jersey that sports the team numbers in a light blue?

Missing logos and the Detroit snafu aside, that card just doesn't do it for me.