Tonight the Tigers host the Braves on Sunday Night Baseball. Lets face it no sport is probably more parochial than baseball - If your team ain't playing, chances are your not watching.  Typically I do try and check in with the Sunday Night game for an inning or two - I enjoy that the focus of the baseball world is on just two teams for a moment.

This season I am going to try and run a series focused on the Sunday Night game - This will give me a chance to check out some teams other than the Phillies. 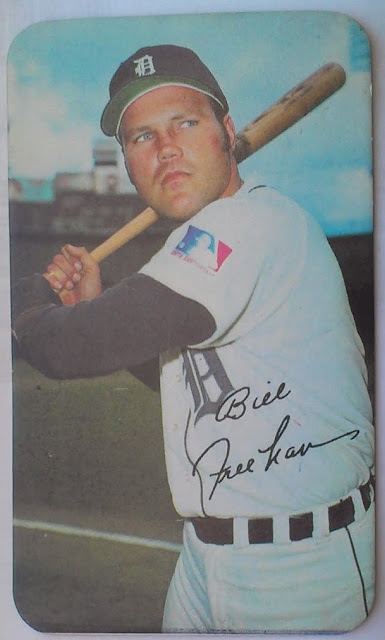 I like the use of Jumbo or Super when discussing oversized Topps Cards.  If you look up Topps Giant you get a bunch of Willie Mays McCovey and Tim Lincecum cards.

Topps Super and Jumbo are a good bit larger than their base set partners, but have a similar back.  The Supers are a bit more landscape in dimension so some of the demographic info on the flip is a bit different 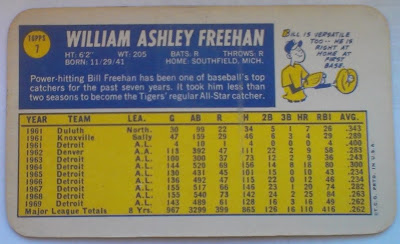 
The Bio information on the Freehan Base 1970 Topps #335 (click link then click photo to see flip) is composed over 2 lines on the Super rather than 3 on the base.

Bill Freehan was an eleven time all-star for the Tigers with whom he spent all 16 years of his career.  His was the starting catcher for the 1968 World Championship squad that defeated Bob Gibson and the St Louis Cardinals in seven games. That was likely also Freehan's best season - he finished 2nd in the MVP voting to teammate Denny McLain (31 Wins).  Freehan's numbers that year included 25 Homers and 84 RBI.

For his career Freehan tallied 200 Home Runs and 1591 Hits.  I am not sure if those are Hall of Fame Numbers but if a man was an all-star 11 times at catcher he had to be solid.

I picked up the above Bill Freehan card for a dollar at the Granite Run Mall show this past weekend.