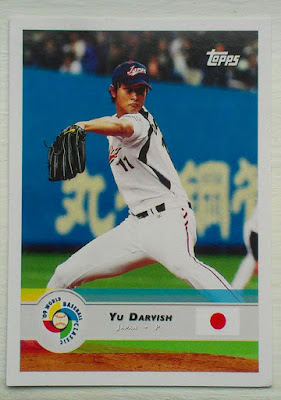 There is a reason they call them Perfect Games - The pitcher has to be on, and a lot of things have to go their way.

In fairness to the baseball fates Darvish did give up some soft liners that went directly to infielders.  That sort of balances out the the 5-hole single that ended Yu Darvish's Perfect Game and No-Hit bid.

Regardless the 2013 season is off to a fun start, I hope the remainder of the campaign can measure up to the drama of these first few games.

Last night a question came up from @SoozOnSports about removing Darvish on pitch count.  I cited a 1990 opening day game that featured Nolan Ryan's removal from a No-Hitter.
The game is noteworthy for several reasons.

1) There is the significance of Hall of Fame pitcher Nolan Ryan being on the mound.  By 1990 Mr Ryan was already a Hall of Famer and had likely earned the right to start and finish a game any way he pleased.

2) As we all know Nolan Ryan authored a Major league record 7 no-htters - 5 prior to the Opening Day game  noted above.

3) Nolan Ryan is a noted opponent of pitch counts

4) Finally Yu Darvish and and Nolan Ryan are both members of the same organization, the Texas Rangers.

So yes way back in 1990 Nolan Ryan, pitch count opponent, was removed from a No-Hitter largely because it was early in the season and he had not been stretched out.

This is only partially true - nothing exists in a vacuum.  If we look a little deeper into the Ryan non-No-Hitter we find he was only 5 innings deep.  He had 91 pitches at that point - Yu Darvish was 20 outs into a perfect game by the time he threw his 91st pitch.

The Ryan Box Score also does not note that there was a labor lockout prior to the 1990 season. At the time of the Rangers opening day game the Ryan Express had only logged about 7 innings during an abbreviated and rushed spring training. While Ryan is not a fan of pitch counts, there was likely little doubt he was going to be lifted from that particular game prior to it's conclusion - regardless of the circumstances.

Great card... gotta find me this boxed set. As for the game, I was so excited & nervous for Darvish. I can't stand the Rangers, but I really, really, really wanted him to join that elite club.

I can't remember wher I picked mine up, but I think it was in the $15 range.

Amazon still has them for $20 which was original list price:

I think I saw somebody w/ several boxes for $12 at a card show a few yrs back.

It is a solid set with lots of stars and early cards of Darvish and others.

Thanks... I'll go check it out. I too remember these being discounted a few years ago.