The game didn't go real well, but the magical season that followed was a lot of fun.

I honeslty don't remember much about the game - I think it was a little windy and chilly for the suckers in the shade.  Krukker got to 2nd on a defensive indifference in the 9th, which brought a cheer from a bunch of fans that saw it as a fat man steal. Game featured a bunch of Homers by all the Phils stars, Kruk,  Dykstra and Daulton (2).  Unfortunately got four of their own including one by Mark Grace. 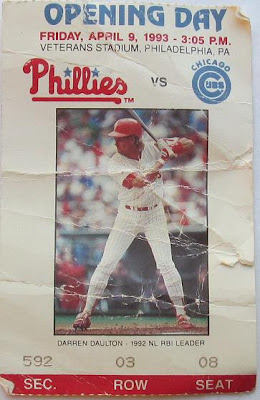 Far out! i was at this one too. OMG was it cold! Me and Kel were in section 206. Was that the one where the Phanatic skydove out of an airplane?