Bill Mazeroski is the Hall of Fame Shortstop who spent his entire 17 year career with the Pittsburgh Pirates. He is best known for hitting the game winning Home Run in game 7 of the 1960 World Series to finish the Pirates dramatic upset of the mighty New York Yankees.

The Yankees outscored the Pirates 55-27 in the 1960 series but lost basically because the Bucos took all the tight games while all three of of the Yankees wins were by lopsided scores of 16-3, 12-0, and 10-0.  The Yankees averaged just under eight runs a game for the series and Lost!

Mazeroski's career .260 batting average makes him one of the more debated Hall of Famers. In his 1990 book "Men at Work" George Will dedicates a fair amount of time supporting Mazeroski spot in the Hall based on his defensive prowess.

The stats and advance defensive metrics that may not have been available at the time of the publication of "Men At Work" back up Will's argument.  His career DPs at second are first all time as his his career "Total Zone Runs" His carreer Assist number ranks 3rd all time versus a career error number clear down at 62nd.  He wasn't anemic at the plate accumulating 2000+ Hits. He was a 10 time all-star and part of two Pirates World Series teams (1960, 1971)

Spending an entire career with one team as Mazeroski did is typically a bonus. Bill Mazeroski has spent a lot of his post career time with the Pirates as well filling in the Ambassador role for a club that has struggled on the field for the past two decades.  In 2001, Eleven years after the publication of "Men at Work" Mazeroski was elected into the Hall of Fame by the Veterans Commitee. It was a controversial election and which has led to modifcations to the Vet Comittee voting process. 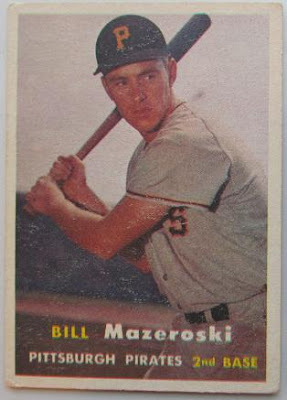 When I returned to collecting this BIll Mazeroski Card was one of my first ebay picks.  This card was part of a small lot of Vintage HoF cards I picked up on via auction.  It is in real decent condition was a steal at $3.50.  Recent sales have concluded as low as $7.45.  At least 4 recent auctions of a 1957 Mazeroski finished under $12. A PSA 5 (Excellent) card went for $30. The card topped at $322 for PSA graded 8 (NM-MT). 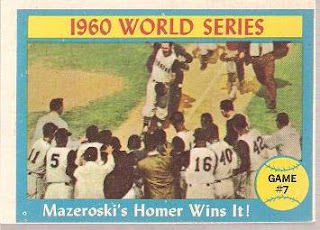 1961 Topps #312 1960 World Series Game #7 Mazeroski's Homer Wins It!
Another fine Bill Mazeroski card is the above 1961 Topps Card celebrating Mazeroski's famous Home Run.  This card was purchased for a dollar at a show in 2009.  Probably should dedicate a proper posting to this card alone at some point in the future.