Gus Triandos passed away last week at the age of 82.  Triandos only played two seasons for the Phillies but he played an important role in a game on Fathers Day 1964. He caught Jim Bunning's Perfect Game and until 2010 he was the only catcher in Philllies history to have done so. That year he was joined by Carlos Ruiz who caught Roy Halladay's perfect game.

Gus has a few other interesting accomplishments across his 13 year career.  Check is Wiki page for further reading but he was the first player to catch a no-hitter in both leagues - Prior to the Bunning perfecto Triandos caught a no-hitter by kncukleballer Hoyt Wilhelm. 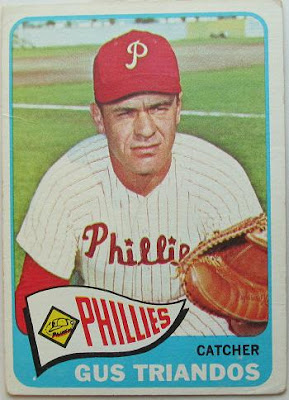 There are only 2 Topps Cards that feature Gus Triandos with the Phils. The first of which was in 1964, but he was wearing a Tigers cap and uni for that card. This makes the 1965 Topps card above the only one which features Triandos in a Phillies uniform.

There is a bit of an oddity that I noticed on the Gus Triandos card.  See if you can find it when you see Triansdos when with his 1965 Topps Phillies brethren. 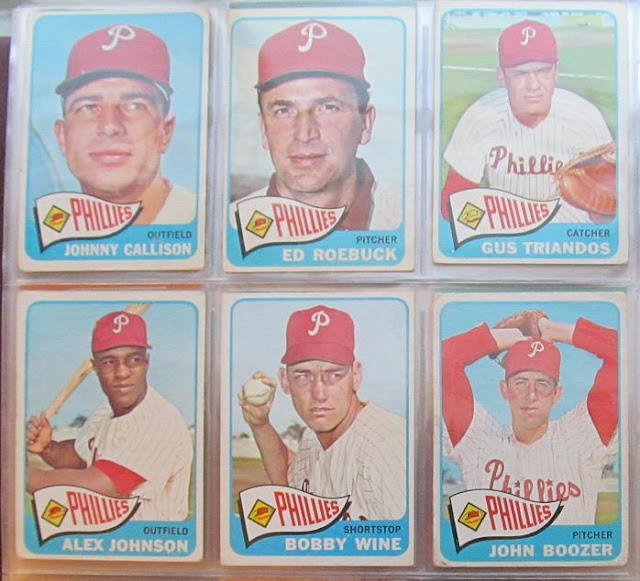 Ok one last hint check the logo on the pennant.  For whatever reason the cap on the flag for the Gus Triandos card is not colored in.  It is clear while the rest of the Phils cards are red.  I don't have the entire Phillies 1965 set, but I have a good bit of them and to my knowledge this is the only one of the cards that does not have the red cap.  I checked around on line and found that my clear cap Triandos is not unique - every 65 Triandos card is a clear cap.  I asked Bob Lemke about this and he said that the card would follow under the uncorrected error (UER).

For more on Gus Triandos(especially his Orioles career) and his 1965 Topps Card check out this posting at the Great 1965 Topps Project
Posted by deal at 7:11 PM