This past Wednesday night Janeane Garofalo’s brought her Stand Up act to Philadelphia’s World Café Live. The Veteran Comedienne put on a great show that kept her audience laughing for the entire 90+ minutes she performed.

Garofalo briskly moved through several divergent set pieces which evolved/devolved on amusing tangents. When she veered off topic some subjects got dropped, but she typically returned. 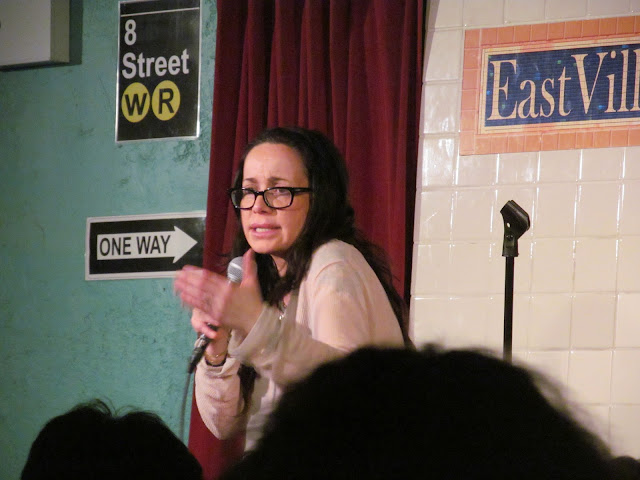 I didn't take any pictures at WCL on Wednesday Night, so you get this one from last winter.

At the time Garofalo was working on new material during at a Comedy Club in New York City. A couple of those pieces were brought out more fully during the long format show including bits on Student Debt, House Hunters, and Elitist Food Trends.

She did extended routines on How to Handle Your Intervention, Walking/Talking Dead, Danny Aiello, and the Sierra Club repeatedly asking her for more money even though she is already a monthly contributor.

The Aiello was particularly memorable, On most of her Celeb bashing Garofalo tended to open with I don't know (miscellaneous celeb), I am sure they are very nice but... Well with Danny she had a personal experience, the two shared a train car and she painted Aiello has a person in need of chronic attention. He kept begging people to notice him on the train car - including singing.  Then Aiello kept repeating his love of congressman Ted Cruz. And as she often does in her set Garofalo was able to tie a funny story to a political point.

Classic bits of hers were updated. She has been doing a Prescription Drugs and their Side effects routine since I first saw her in the early 90s apparently the side effects have escalated to death at this point. She also continues to name dropped Law & Order mentioning to Millennials that yes there was a time that L&O did not exist.

etc,,
--Opener David Hill delivered a decent opening set, His delivery takes a bit of getting used to it, but he had enough good routines to earn a twitter follow.
--I was presently surprised how much warmer World Café Live had felt this visit. In the past the room seemed a bit too bland. There didn’t appear to be any major changes – maybe some subtle ones or possibly I am just getting used to the place.
--Lastly there was a 10 year girl performing on WCLs other stage. It was a bid odd to emerge out of the main room to see a 10 year autographing CDs and other keepsakes.