The oddities of Year of the No-Hitter continued on July 12th.
. 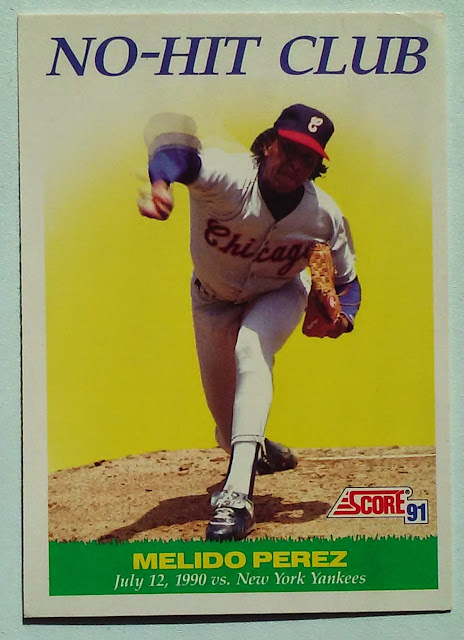 My apologies for the image, my lazy photography coupled with a shadow on the card results in Melido's face being completely dark.  Fortunately we have a profile picture on the flip of the card. 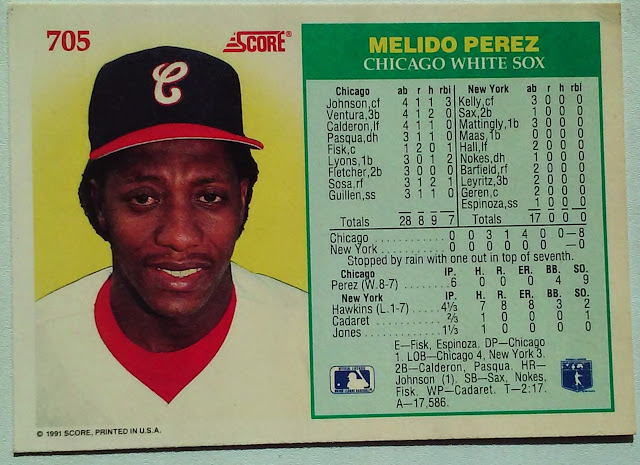 In the Box on the back you will notice the short line score. The White Sox were leading the Yankees  8-0 in the top of the 7th when the game was called due to rain. This meant that the no-hitter only lasted six innings. It also meant that Perez suffered a fate similar to Andy Hawkins earlier in our No-Hit Series - the No-Hitter was rescinded.

There is one important difference between the rescinded no-hitters of Melido Perez and Andy Hawkins - Perez got to go home with a Victory.

Now look deeper into the box, check out who the losing pitcher was, yep Andy Hawkins - He might be the only pitcher to lose two shortened no-hitter. He did it in a two week period and he actually pitched one of the no-hitters.

Box Notes
The game was caught by Carlton Fisk. Due to the withdrawal of the no-hitter the Hall of Fame catcher never got credit for calling one. Other notable White Sox in the lineup include Robin Ventura, a Young Sammy Sosa (batting eighth!!) and Future ChiSox World Series Champion Manager Ozzie Guillen.

The Yankees one of their most mediocre lineups for the game. There are some semi-stars in there but the only big one is Don Mattingly and he was in the middle of a down year.

Pascual Perez
Sadly Melido's Brother Pascual was murdered in 2012. On a much happier note we must mention that Pascual has his own no-htter story that we intend to cover in a future post.

Sources and Links
1990: Year of the No-Hitter index
Retrosheet
ESPN
baseball-ref
Posted by deal at 11:11 AM