Baseball Hall of Fame weekend is here and it is a lot more joyful to have four players going in than a year like 2013 when the BBWAA failed to find a consensus on any players.

The top vote getter in 2013 was Craig Biggio, who despite racking up 3000 hits is viewed as a borderline Hall of Famer.  Borderline or not, the Career Astro is now a member of the Hall. 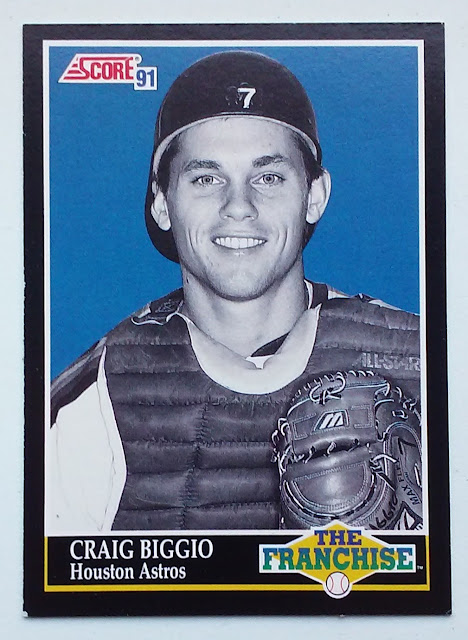 Craig Biggio will go into the hall as a second baseman, but he debuted at the Major League Level as a catcher. Anytime I see a Biggio Catcher card in a dime box, I add it to the Phungo Collection.

This one is one of my favorites. It is clear Biggio is wearing the tools of Ignorance and I like that the catcher helmet identifies him with the #7 that the Astros have now retired in his honor. 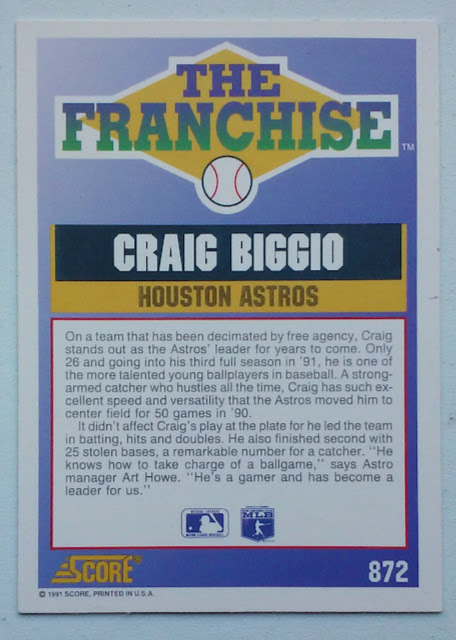 The text on back of this 1991 card captures Biggio at the moment he is transferring away from the catcher position. He would moved to the Outfield before settling in at second base for the bulk of his career although he would do time back in center in 2003.

1991 Score
The Franchise is a 26 card subset with one star card to represent each of the Major Leagues then 26 teams. The Phillies Rep in the set is Lenny Dykstra.