Tonight on the day of Pedro Martinez Induction into the Hall of Fame ESPN's Sunday Night Baseball is honoring the occasion by Featuring the Boston Red Sox as the Host the Detroit Tigers. 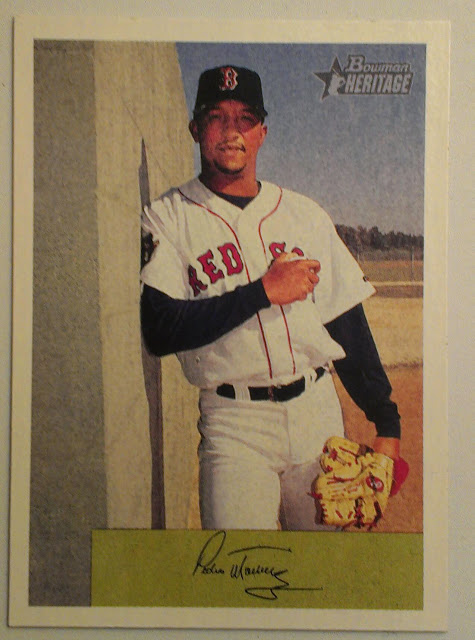 After a little bit of debate, I have decided to go with a Retro card as my Anchor card for Pedro's Phungo HoF series.

I love this card - A decade ago when Retro Sets were still sort of new it felt like the card companies tried harder. 2002 Bowman Homages 1954 Bowman. The Pedro #66 Card echoes the Ted Williams Card that sort of held the position in the original Bowman release.


And there is your proof that Martinez lives at House #66 in 2002 BowHeritage, notice above that I specified that was a position "Sort of" held by Ted Williams. Turns out that in 1954 Topps had inked a trading card contract with Topps and Bowman had to pull the card from the set. Rather then leave an open spot on the checker Bowman replaced Williams with Jim Piersall

Similarly #66 in Heritage is occupied by a pair of Red Sox.

There is the A-side of Nomar. I think the Black box for the player signature is an additional level of variation in Bowman Heritage - so yes variations have been around a while.