Phillies are in Toronto for a quick two game series, which gives us a chance for a Roy Halladay posting. We have featured Doc a number of times as a Phillie, but I don't believe we have posted him as a Blue Jay until now. 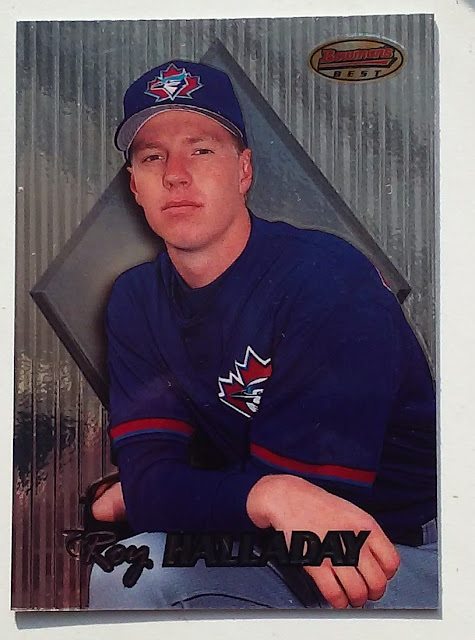 While Roy Halladay has a number of career highlights with the Phillies, the bulk of his career with the Blue Jays.

Among players on the Blue Jays All-Time Roster Halladay ranks #2 in WAR behind only Dave Stieb. Halladay won 148 games as a Blue Jay including a league leading 22 in 2003 when he won his first of two Cy Young Awards. When this card was issued Halladay had only two career MLB starts. The text on the back of the card refers to the 2nd of these starts when Temple Alum Bobby Higginson spoiled a potential no-hitter by Homering off of Hallday with two outs in the 9th inning. The Blue Jays beat the Tigers 2-1 that day giving Halladay the first of his 203 career victories. He threw mere 95 pitches in the complete game - 73 for strikes.

Sources and Links
Year of the No-Hitter Index
baseball-ref